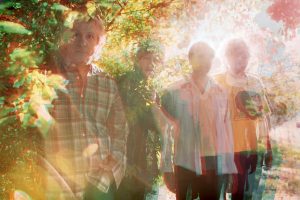 Lee Ranaldo and The Dust (photo by John Von Pamer)

By Andy Fetter
As hard as it might be for a lot of people (myself included) to process the fact that Sonic Youth might never play again, I keep getting excited when members of the band put out more new music. Just because the band itself isn’t active, all four members haven’t slowed down. And what they’ve done since then is pretty damn good on top of that. Lee Ranaldo’s latest album Last Night on Earth, released almost a year after both Sonic Youth ending and the events surrounded by Hurricane Sandy, does what any good record should do: it takes the listener on a journey.
Living in New York, Lee and his family were affected by the storm, although not nearly as badly as others.
“We had no electricity, heat, or running water for about a week,” he said. “We were certainly luckier than most people but we still did feel pretty isolated.”
It’s not an ideal situation to live in when you have a family, however at times it can create interesting circumstances for writing music. Lee told me he wasn’t trying to capitalize on it.
“I didn’t want to make a huge deal out of that situation. Only a few songs really dealt with it. I mean the album title is Last Night on Earth and the artwork has a real post-apocalyptic feel, but I really meant for it to be kind of vague as opposed to just talking about one specific situation.”
Last Night on Earth is one of the most transparent and personal records that Lee has put out. Quite often solo records are focused on the primary songwriter, which requires putting themselves under a microscope.
“The lyrics for this album were the hardest part to write,” Lee explained. “Making these kinds of records often opens windows into writer’s lives. It sort of becomes your job to put yourself on the line. It’s similar to how songwriters in the ’60s and ’70s would approach it.”
In contrast to his last solo record Between The Times And The Tides which featured Lee and a rotating cast of contributing musicians, Last Night On Earth features Lee backed by an official band simply called The Dust (which adds so much to the previously mentioned post-apocalyptic feel).
“On that last record, I just laid down most of my parts and then everyone else added their parts at different times. There wasn’t really much collaboration in the studio.”
The Dust consists of Steve Shelley on drums (who Lee has collaborated with in Sonic Youth for over 25 years), Alan Licht on guitar and Tim Lüntzel on bass. According the Lee, the way the band evolved and came together was very natural.
“Obviously Steve and I have worked together for a long time. Alan and I have worked on music together, but it was more experimental. And Tim has played music for a while, but not really in traditional bands, so it was good to have each member come from a different background. After Sonic Youth ended, I played music a lot with other people, but didn’t really play in any other bands.”
When you work with basically the same group of people for so long, it can sometimes be a rough transition with different people. According to Lee, part of making the record included making that transition.
“It was a fun process. I spent a lot of the time in the studio getting used to playing in a band again. Having them there through the whole process, we were able to capture the spontaneous energy and let things grow organically. We’d played some live acoustic shows in France a while back, and we played some of these songs when they were still new in a more stripped down vibe. When we got into the studio, the songs gradually became more electrified.”
Lee and The Dust spent almost 10 months in the studio. With that much time spent writing and dissecting, the temptation would be there to tweak things for too long and be so far from where things began.
“You learn to recognize when things are done,” Lee said. “Usually songs are played live after they’re recorded and they find their footing then. Songs like ‘Lecce, Leaving,’ ‘Home Chds,’ ‘The Rising Tide’ and ‘Last Night on Earth’ came together really early on. The songs were structured to be more open ended and they’re meant to go different places live.”