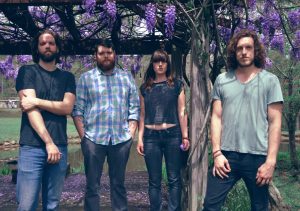 Jacksonville, Florida’s Sea Cycles create picturesque music that is elaborate and ornate; their goal is to create an atmosphere or feeling that stays in the mind’s eye in vivid color. Formed in late 2011 the band began releasing their brand of ambient synth pop via their self-released debut EP What We Came For.
After catching the attention of Other People Records, the band are gearing up to release their full-length debut Ground & Air via the Los Angeles, California-based independent label Other People Records on June 9. Drawing positive comparisons to indie favorites such as Broken Social Scene, Yeasayer and M83, Sea Cycles appear to be less a drop in the ocean of indie rock and more a phenomenon that could permanently alter that environment.
Ghettoblaster recently spoke with drummer Josh Wessolowski about their place in the Jacksonville scene, creative process and the new record.
Are you originally from Jacksonville or a transplant? How does Sea Cycles fit into the musical scene there?
We’re all transplants. I grew up in Wisconsin, Lindsey (Shante) is originally from Birmingham, Alabama, and Landon (Paul) and Brian (Squillace) both grew up in North Carolina. Sea Cycles fits well with the local scene in Jacksonville. It’s a pretty tight knit group of musicians drawing inspiration from one another. In the last five years, you can tell that the music scene has grown exponentially. Jacksonville has also seen a lot of growth in the local business and art communities.
You began playing together in 2011. What are the predominant lessons you’ve learned about each other musically over the course of Sea Cycles’ time together?
We’ve really had a chance to grow together as musicians, and each member brings a unique style to the band. We’re all a little different from one another, musically, but those differences shape the sound in a great way. Four years seems like forever as a band, and you learn a lot about each other, not just as musicians but as people. Nobody is bigger than the group, and we all know that each member plays an important role in the success of this band.
When did you begin writing Ground & Air?
It was the summer of 2013. I remember having a conversation with Brian before that, in which we discussed recording an album piece by piece with every song written in the studio, and taking our time, with no predetermined structure. He had just moved into a new house, and we wanted to use the space in a way where we could have instruments setup at all times. I would go in and just play on a track for a couple hours and at the end of the day, if we liked it, we kept it. All of the songs usually start with a melody or a loop based melody.
It was a liberating experience, but the next album will evolve first in a practice setting where the songs can grow and change before we go in a record them. Every song on Ground & Air changed a handful of times before we actually had a finished product.
Were you consciously trying to create such a cinematic and atmospheric record?
It was the bands goal from the beginning to create an encompassing mood for the record. We think of it as a photo or a painting. When you look at a photo or a painting you might not understand it, but it makes you feel a certain way and maybe takes you somewhere else. That has always been a huge aspect in our songwriting. We’re inspired by the same kind of music, so if we can make people feel something our goal has been reached.
What are some records or bands that you find are touchstones for Sea Cycles, and more specifically for you, as you create?
I’ve always listened to a lot of jazz. Coming from a long line of drummers it was kind of impossible not to stumble upon it. When I write music, I think in terms of color. Fitting colors together and sometimes juxtaposing them so much that the end result is something you couldn’t imagine. I love to improvise and see what comes from it in the end.
Under what circumstances did you begin working with Other People Records and do you believe their involvement is helping you to reach new audiences?
We used to rehearse above a bar in downtown Jacksonville called the Phoenix Taproom. One night after we finished a song we walked into the hall for a break and Jesse Barnett of the band Stick To Your Guns was standing there asking us for a CD. We didn’t realize it, but at the time he was getting ready to play show, which says a lot about a person. He took time out of his night to talk to us and tell us he was thinking of starting a label. He could’ve just walked down stairs. He could’ve said nothing.
That was the night that our future as a band changed. The involvement of Other People Records has done so much for the band it’s hard to sum it up in one paragraph. We are forever grateful for that fortuitous meeting.
What are your foremost immediate goals for the band? What are your loftiest goals for the future?
Touring is priority for us right now, and not just in North America. Experiencing tour life and learning how to do that is going to be fun and very interesting. Our loftiest goal is to sustain life solely as musicians. We all have bills and we work to pay them, but it would be serendipitous to be able to accomplish that as musicians.
(Visit them at www.seacycles.net. Catch them live here: