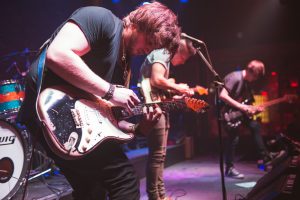 Vancouver-based progressive indie rock band Hawking is an enigmatic and sophisticated band that admittedly still struggles to find its “scene.” Too musically academic for punk rock, but a little too punk for indie sets, the band crafts atmospheric guitar rock that is just different enough to distinguish it from any crowd, but familiar enough to satisfy a variety of audiences.
The band recently hit the road for its first North American tour in support of its upcoming self-titled EP, out July 14. The two-month tour takes the band across six provinces and 14 states including Ohio to promote the release.
Ghettoblaster recently caught up with lead vocalist and rhythm guitarist Tom Vanderkam about the band’s Vancouver home, fitting into a scene, a devastating car accident and a new EP.
Are you guys originally from Vancouver?
Three-quarters of us are from the Vancouver area. Our guitar player is from Moose Jaw, Saskatchewan though, which for those of you who are unfamiliar is out in the middle of nowhere. It’s basically the Canadian version of Moorhead, Minnesota, or something.
How does Hawking fit into or reflect the music scene in Vancouver?
Vancouver has a weird music scene for sure. As far as underground stuff, hardcore and math rock are gaining momentum lately, which I dig because I’ve always loved those scenes. As far as mainstream stuff goes, I think indie rock and folky, Mumford-ey stuff is still biggest. We don’t really fit into any of those scenes though—we’re too punk for indie and too indie for punk; we’re too math for everything, but not math enough for math rock. Our struggle has been finding a community we identify with. I think that’s why we love being on the road so much, because in each city there’s at least one or two other bands who we click with and who share our identity crisis.
You’ll be spending two months on the road during this North American tour. Did you ever worry that this amount of time would be too long?
Totally. We all like having our proverbial nests and this is the longest tour we’ve done yet. Being on the road is awesome though, and we love it. We’re already like three or four weeks in and it still feels like we only left a few days ago, so I don’t think it’ll be an issue. Homesickness is definitely a thing though. You’ve got to call home as much as you can. Family is important, kids!
During a previous tour of Western Canada, you were involved in a car accident. What was the recovery process from that like?
It was a brutal wreck. If you look at the photos from the scene, we should all be dead. It’s heavy. Most of us had the usual—fractures, breaks, concussions, puncture wounds, burns, as the engine came through the dashboard and those things get hot—so we took a few weeks to a few months to recover.
Our drummer, Chartwell [Kerr], was injured the worst. He’s still got screws holding his feet and legs together, and more metal plates than anyone would prefer to have present in their body. He’s got a few surgeries ahead of him still, so his recovery is far from over.
Our old bass player, Paul [Engels], got it the worst mentally though. The guy was in a coma for five weeks after the accident and is still enduring the long journey back to normal. He wasn’t able to continue with the band. He’s doing a lot better now though from what I can tell. But yeah, overall we’re just happy to be able to move on from that and keep touring as strong as ever.
In July you’ll be releasing a new EP. When did you write and record that?
Correct! July 14 our EP comes out. The whole process took around nine months. I think I started writing lyrics for the record while we were on tour last summer and it all went from there.
What benchmarks did the band reach during the development of the EP that were firsts for the band?
I think this is the first time we’ve ever felt truly confident that we’re putting out a cohesive set of recordings. We always have to release music in small bursts because we’re constantly changing sonic elements and whatnot, but we’ve really started to settle into our own niche here. It’s about damn time, we think.
Will this be your first trip to Dayton? Are you familiar at all with our city?
We’ve never been to Dayton before, or the Midwest at all, for that matter. We’re mostly excited to play in and around the birthplaces of so many American indie and emo bands who’ve influenced us and who we look up to.
Also, the anarchist skate-punk haven that is Skatopia is only a two- or three-hour detour from our route, so I think some harsh gnar-shredding will need to ensue.
What is next for the band?
We’ve still got a bunch more content coming down the pipeline. Lots of videos. Once this tour’s over, we’ll be doing more travelling to play some one-offs and festivals here and there, and be at home for a bit to do some local shows and spread the word about the new EP. We’ll likely proceed to hunker down and make another record during the fall and winter, emerging in the spring as usual from the depths of the basement to tour more and continue our adventures.
(Hawking will perform Friday, June 26 at South Park Tavern, 1301 Wayne Ave. in Dayton. The show begins at 9 p.m. Tickets are $5 at the door for patrons 18 and up. The Zygotes and Good Luck Year will also perform. For more information, please visit hawkingband.com.)