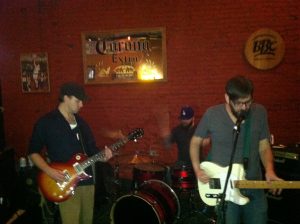 Few Dayton, Ohio-based musicians have enjoyed the opportunity to support as broad and diverse a list of nationally and internationally recognized musicians as The 1984 Draft’s vocalist Joe Anderl has with his various projects.  To name just a representative sample, he’s supported everyone from indie rock heavies like Maritime, The New Amsterdams, The Wrens, Murder By Death, Limbeck and Ink and Dagger, to celebrated songwriters like John Vanderslice, party rocker Andrew WK, and even hardcore heavies Everytime I Die and H2O.  Then again few area musicians have transformed their musical identity as many times as Anderl has.
His high school ska band took second place at the annual Canal Street band playoffs (once won by legendary rockers Brainiac), his hardcore band Keaton played to packed houses in basements and at Knights of Columbus Hall and recorded with Chris Common (Minus The Bear, Native), and he’s charmed open mic audiences, art house and bar crowds inside and outside of the Gem City (including tours with The Gunshy, Nostra Nova and Winter Makes Sailors) with his softer, singer songwriter side.  He also ran the short lived boutique label Bettawreckonize Media, releasing records from the likes of Southeast Engine, The Kyle Sowashes, and 8 Bit Revival in the mid ‘00s.
His current project, The 1984 Draft, which includes powerhouse drummer Justin Satinover and studied axe-man Eli Alban, demonstrates another transformation — to a passionate trio that channels alt-folk sensibilities through a ‘90s emo and hardcore lens.  The trio are currently recording The 1984 Draft debut album, Return to Tallboy Mountain, with a target release date in May, while writing it’s follow up Return to Tallboy Mountain, Again.  The band will support the record with a run of shows beginning in May.
Ghettoblaster caught up with Anderl to ask about his experiences.  This is what he had to say….
Over the years you’ve operated in a variety of genres, from hardcore to alt-folk and ska to emo.  Where do your loyalties lie?
I think when I am writing it still comes from an alt-folk sensibility.  Most songs start off with me just writing the main idea on acoustic.  Now, when I bring it to the band, I think we come from a mid ‘90s hardcore direction.  That’s what makes it so fun to be in the draft.  We can really land anywhere when we are done.
How would you describe the draft’s current sound?
We are like a “Rick Roll.”  It first comes as a surprise, but then you find you just can’t get enough
Who is involved in the draft currently and what makes them good collaborators?
For the first time ever, the draft has two other full time members.  Justin Satinover plays drums and sings.  Eli Alban plays guitar.
As far as the collaboration, I think that is the reason I can finally have other full time members.  Justin plays his drums like another instrument.  He thinks of songs differently than just keeping the beat.  He is also a master arranger and his style is really what helps shape a lot of the songs.
Eli is the workhorse.  He practices constantly and came up to speed on most of the songs really quickly.  His guitar work is the rest of the color the songs needed.
I guess it works because we all play a different role.  I view it as I come up with the concept of the picture, Justin adds all the lines, and Eli fills in the color.  It also doesn’t hurt that we all get along outside of making music.  I think we spend more time at practice laughing than we do actually working on music.
Do you have a release or shows planned for 2013?
We are currently working on recording The 1984 Draft debut album, Return to Tallboy Mountain and are writing it’s follow up Return to Tallboy Mountain, Again.  We’re booking some shows starting in May and hope to make it a little more regular than it has been over the past few years.
Has not having much label involvement hindered your endeavors over the years, or has being autonomous kept you focused?
That’s a good question.  I guess I never considered it since no one has ever really offered.  I used to put out my own records on Bettawreckonize Media so I don’t know any other way to do it.
That being said, having run my own label and fronted my own cash for a lot of other bands.  It would be nice to get some help every now and again.  I know I put a lot of blood, sweat, and tears to the bands I put out, so it would be great to have someone aside from my bandmates and our families helping us to reach a higher goal. It takes a lot of work to be an artist, run your own label, and still try to hold your life together.  I guess that is why now, I don’t run a label.
Which of the past shows that you’ve played have been your favorite?
As this version of the draft, it was Holidayton.  It was good to get Eli in the band.  My favorite of all time though was having the chance to open for John Vanderslice with Shrug as the supporting cast of the draft.  It was my wife’s birthday and JV came off the stage and played the song that we ended up dancing to at our wedding right to her.  My least favorite was playing with Matt Pond.
(Check out tracks by The 1984 Draft here: http://the1984draft.bandcamp.com/.)