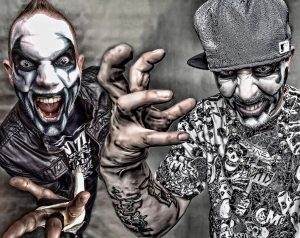 Twiztid terror
Detroit horrorcore rap legends look back at their bloody trail of hip hop madnessby Jason Webber
You don’t mess with Twiztid.
After almost two decades of sailing in the dangerous waters of the Detroit hip hop scene, Monoxide and Jamie Madrox have created a gloriously gory musical legacy as the serial killin’ horrorcore duo Twiztid. After rising from the ashes of the much revered early-‘90s rap outfit House of Krazees, the two teamed up with Detroit’s notorious Insane Clown Posse and were quickly embraced by ICP’s obsessively devoted fanbase, the Juggalos.
The things is, these guys are too good to be limited to just Juggalos, as their new album “Abominationz” reveals. Though both ICP and Twiztid share a record label (Psychopathic) and a mutual love of horror movie-imagery, Twiztid specializes in a darker, heavier brand of hip hop that owes more to King Diamond than to King Tee. This is rap music at its most sinister and thought-provoking and the result is a nightmarishly funky musical stew that deserves to be taken more seriously by a broader audience.
With Twiztid’s 15th anniversary nearly upon us, Ghettoblaster decided to track down the axe wielding duo and look back at their career of mayhem. Since they were on their autumn tour, it took a few weeks to get everything together and ultimately we had to conduct the interview via email (props and thanks to Twiztid’s touring manager George Vlahakis who, bless his heart, busted his ass to try and get us the answers back sooner). We touched on it all — how they’ve grown in 15 years, how Twiztid deals with angry parents and the final word on who really is the ultimate horror movie killing machine.
Twiztid has officially been around for 15 years. Looking back, in what ways do you think you have evolved the most?
Monoxide: There’s not a single aspect where we haven’t evolved. That’s my opinion, of course. From planning a CD, to recording and writing for it, to marketing, promoting, etc., I think we’ve grown in every facet of the process. We came in as rappers but through time we have evolved into a brand. That’s 100% a tribute to Madrox and I. Short of the fam buying the CDs,  no one has done more to further the journey of Twiztid than us. With talent and honesty we have built something much bigger than Twiztid and we couldn’t be prouder and more honored! This is the American Dream, right? Two white kids from the ghetto of Detroit come from out of nowhere to make a mark that is still being made as we speak. I still consider Twiztid to be music’s biggest kept secret.
Since you’re both horror film addicts, I have to ask—what’s the last good horror film each of you saw?
Monoxide: Horror movies suck these days. That’s why they keep remaking the old stuff. I liked the first couple “Saw” movies but I lost interest after part 31. I really like the “Paranormal Activity” movies though. They’re scary because it seems like it just might be able to happen.
Jamie Madrox: I really liked “Cabin In The Woods.” It was a good mix of the new Hollywood horror and humor trend.  Also, “The Possession” was really good!
You guys are really prolific, usually putting out at least one album a year. How long does it take you to write an album?
Monoxide: We’re fast! We can write and record a song in a day; sometimes we can do two or three songs in a day. We recorded “Abominationz” in three weeks. It’s the mixing that takes forever. “Abominationz” was recorded in three weeks but it was mixed for three months. That’s what takes the longest. It drives Madrox nuts but I love it so I do as much of it as possible to keep him out of that hell.
Is one of you more of the main lyricist or do you both contribute to lyric-writing equally?
Monoxide: We both write. In the beginning a lot of the concepts and ideas as far as song themes  and CD titles were Jamie’s. but as far as songwriting we have always written our material (collectively). In the beginning I had no clue how to write and record a song, let alone any other part of the process. That came with making our first full-length but Jamie had already been through that, so I learned though him. I could always write (lyrics) though.
There’s always been a strong dark metal element to Twiztid. Can you name some of your favorite metal bands?
Jamie Madrox: We listen to all kinds of music but as far as metal I would have to say Rob Zombie, Marilyn Manson, Dio, Alice In Chains, Seether, Bullet From My Valentine, Korn, Mudvayne, Papa Roach, P.O.D., Slipknot, 5 Finger Death Punch, Bring Me The Horizon. Stuff like that.
Have you guys ever considered collaborating with King Diamond? I think you guys would gel perfectly.
Jamie Madrox: We have never considered it, but I feel it would work.  You have to have respect for musicians like King Diamond who have been in the game long enough to be legendary and still doing it.  That’s amazing and what it’s all about.
What would you say to a parent who is worried about her kid listening to your music?
(joint answer): I’d say if you (parent or parents) are doing your job as parents/parent then you have nothing to worry about. We are entertainment bottom line. I believe that people with common sense realize this and can accept Twiztid for what Twiztid is … entertainment.
Twiztid always gets lumped into the category of “horrorcore.” Do you agree or disagree with that label?

(joint answer): There’s a few categories we get lumped in that do suck but getting called “horrorcore” doesn’t bother us.
Final question: In a battle royale between Jason, Freddy, Michael, and Leatherface…who would be the last man standing?

Monoxide: Michael Myers! He’s the only one that doesn’t sleep and he is the last of the iconic movie serial killers in my opinion. Just an unstoppable evil.
Jamie Madrox: Well, with Leatherface being mortal, and after seeing “Jason vs Freddy,” we already know that Freddy had the upper hand there. So it seems like Freddy would be a sure shot for the win, but I have to go with my favorite 21st century movie maniac from Haddonfield, Illinois — Mr. Michael Myers — to be the last man standing.