When I found out that Motel Beds, a quintet who are quickly becoming the pride of Dayton, Ohio, were playing the second annual Cyclops Fest in Yellow Springs, Ohio on September 15, I was stoked.  Not only have several of the members of the bands been longtime friends of mine, but the band’s recent Tango Boys and Sunfried Dreams records stand tall as two of the finest records ever turned out by a group of Daytonians.   For those not already in the know, Motel Beds possess a finely-tuned understanding of pop and arena rock that leaves them poised to delight audiophiles and position the band as Southwestern Ohio’s answer to 60s and 70s rock powerhouses.
Ghettoblaster recently caught up with drummer Ian Kaplan who told us about the band’s forthcoming record, tour plans, and participation in Cyclops Fest, as well as the Dayton Dayton Revival Festival.  Here’s what he told us…
For those who haven’t seen Motel Beds, how do you describe your sound?
We, of course, think we sound like a choir of angels.. sweaty, hairy angels. However, I have been told that we sound like The Who, The Beatles, Link Wray, Guided by Voices, The Beach Boys, Big Star, Elliott Smith and The (Male) Supremes. I hope this helps.
Who do you believe your musical contemporaries are?
That’s a really good question… robthebank, Human Cannonball, Buffalo KIllers, The High Strung, Southeast Engine…
You guys have collaborated with Brian Johnson, one of the organizers of Cyclops Fest in the past, right?  What kind of work have you done with him?
We can’t say enough good stuff about Brian. He helped us out by doing live screen printing of our most recent t-shirt design at the release show for our third album, Tango Boys. Since then, Brian offered to cart our gear down to Austin for our SXSW gig and, while there, do live screen printing for our record label’s showcase show. Again, he’s fantastic.
Did that relationship yield your participation in the forthcoming Cyclops Festival?
Definitely. Brian asked us to perform and we couldn’t say no. He’s done a lot of work to help us out and we felt that playing Cyclops Festival was a great way to show him our appreciation.
What is it about the spirit of the event that encouraged your participation?
The fact that the festival provides a forum for local businesses to sell their goods is reason enough. 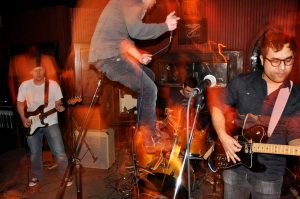 What do MB have planned for your set at the event?
It’s a secret.. but it probably involves playing our songs.
Can we expect to hear any of those delightful covers you sent to your e-mail mailing list last year?
Again, top secret, if I told you, I would have to be killed.
2011 was a flagship year for the beds with you guys releasing two albums almost back to back.  So far this year you’ve released a tape and been to South By Southwest.  What is next for you guys?
Well, we just finished our latest record, Dumb Gold, which should be out in late fall/early winter 2012. We plan on doing a support tour as well as some festival appearances at Midpoint Music Festival and CMJ in October, among other awesome shows.”
You’ll also be performing the Dayton Revival Festival, correct?  Are festival performances complementary or contrary to the Motel Beds sound or m.o.?
Yes, we are and we couldn’t be more excited. I think that every performance stands on its own and as long as we keep doing what we do best, it’ll be quite complementary.
(For more information on Motel Beds, visit the following:
http://www.brotelbeds.com
http://www.facebook.com/motelbeds
http://twitter.com/#!/motelbeds)