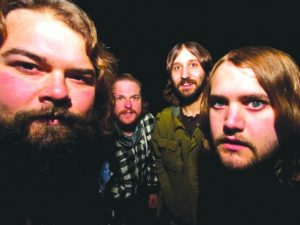 On May 13, ever evolving Cincinnati rock ‘n’ roll group Buffalo Killers release their most straight forward rock album to date, Heavy Reverie.  Armed with the trademark harmonies of brothers Andy and Zach Gabbard, the band have debuted songs from the radio ready effort during early Spring touring and a trip to South By Southwest.  And they’re ready to hit the road again this month, including a stop at Christ Episcopal Church in Dayton, Ohio where they’ll perform with the church’s choir at a Dayton Music Fest and Ghettoblaster Magazine sponsored concert.
Ghettoblaster caught up with Andy Gabbard to discuss the record, their new guitarist and label home (Sun Pedal Recordings), recording on the same equipment as Michael Jackson, and we find out whether longtime friend Chris Robinson, of Black Crowes and Chris Robinson Brotherhood, likes Heavy Reverie.
How were people responding to material from the new record during your stop at South By Southwest in Austin, Texas?
Really good. I think a lot of people that come to those shows probably aren’t very familiar with us, but it was good. A lot of our set right now is all new material. So far so good.
Sven Khans is a relatively new edition to the band. What does he bring to the group?
Sven plays pedal steel and he also plays a lot of second guitar. He’s really good. I’ve known him for a long time and we’ve played in other bands together. We have always overdubbed a second guitar during recording, and we wanted to beef up our live act. He’s great man. Nobody tells him what to do, it just works. He’s on the same page as we are.
I imagine that allows you to translate what you do on record to your live show a little better?
Oh yeah. Absolutely. It makes everything easier for me. When I was the only guitar player in the band I could never let up. There’s a lot more space now. It allows me to get lost in it and have fun.
Your relationship with Sun Pedal is new as well?
Yeah. They contacted us through email and then they came out to some shows. We talked about it for a long time before it was put together. They have a really cool studio, and Jim Wirt is a helluva guy. They know what they’re doing. Recording with them was like going on a field trip to see how professionals do it.
How long were you in Cleveland making the record?
We did the record in four days. I was worried he’d try to dissect and rearrange all the songs. We showed up and set up and played what we had, and Jim was happy with it. We took most of the time there just getting really good vocal takes.
This is our most produced album. It is super clean, super catchy, and it is also our most heavy record. We’ve never made a record like this before, and we never will again. We really want to try and experiment and do different things. We’d never tried to make a super clean, straight to the point record, and that’s what Heavy Reverie is for sure. The attitude was just to make a kick ass fucking record that could totally be played on the radio.
You guys recorded on the same board that Michael Jackson used to do his Thriller demos too, right?
It is unreal that we did, because we listen to the Thriller demos all the time. When Michael Jackson died we brought my sister-in-law’s special edition of Thriller, which included all the demos, in the van with us. So when the guy said that it was the same piece of equipment, it was unreal. We goof around and sing Michael Jackson songs constantly, just like we did when we were kids.
It was a message from the universe that this was meant to be then?
Yeah, we huddled around it and tried to feel the warmth and touch every inch of it (laughter). We wanted to see if a little Michael would rub off on us.
Have you guys kept in touch with Chris Robinson, who you previously toured with?
He’s constantly on the road and always coming through Cincinnati or Columbus so we see him every two months or hear something from him. As soon as we made our new record we sent it to him and wanted to know what he thought. He likes it. I was worried that he wouldn’t like it because it is so clean. I’m always worried to hear what he thinks.
Can you tell us about your upcoming show at Christ Episcopal Church? What is the plan for that?
We are going to play and I think we are going to try to have some singers join us for a crazy, big choir type thing. If we can pull it together it will be super sweet. It is an awesome idea and we are all really excited about it. I’m imagining big assistance from the people singing with us. And maybe we’ll all have to get matching robes. I don’t know.
Final question: Have you ever listened to one of your records?  Have you ever listened to one of your records…on weed?
I can’t listen to records unless I smoke weed (laughter).  I’m half joking.  Sometimes it’s a good thing to get high and listen. It kind of helps you listen from and outsiders point of view.
(Buffalo Killers perform Friday, April 25 at Christ Episcopal Church, 20 W. First Street. The concert is a kickoff party for the 10th Anniversary of Dayton Music Fest, and is sponsored by Ghettoblaster Magazine. Tickets are limited to 250 and available at daytonmusicfest.bandcamp.com.)