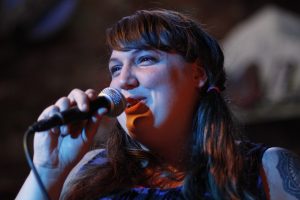 When Corinna Nix packed all her earthly possessions into her ’97 Chevy Lumina to return to Dayton, Ohio the future felt pretty uncertain. She’d completed her studies in vocal jazz at the Chicago College of Performing Arts and spent several years in the city developing her distinct style as a member of Unearthd and The Lix.
However, the constant hustle had become overwhelming and financial and emotional hardships due to the abrupt end of a romantic relationship and musical partnership left her with one clear option: returning home. Beginning a new chapter and saying goodbye to her friends, all the while battling a broken heart, was also overwhelming. She also wondered whether she’d meet the caliber of collaborators she’d become accustomed to in the big city in her hometown.
Nix, who was born in Long Beach, California, and raised in Dayton grew up listening to a wide variety of music, mostly as a result of the eclectic tastes of her parents. However, she always had an affinity for jazz, rhythm and blues and soul.
Like many singers before her, she began singing in church, which provided opportunities to cut her teeth performing in front of large crowds. Her love for performing led to participation in school and community musicals, choirs and solo competitions. Realizing her daughter’s talent, Nix’s mother enrolled her in classical voice lessons, which she practiced throughout middle school and high school.
“I developed a love for music very early on, and I always told my parents I was either going to be a veterinarian or a singer,” Nix said. “Even in middle school when I didn’t want to do my math homework I would ask my dad to do it, and tell him I wasn’t going to need math because I was going to be a singer…cause that makes so much sense.”
During the summer before her junior year, she became involved in a jazz vocal ensemble at a music camp in North Carolina, an experience that Nix identifies as her coming of age as a singer. She fell in love and began listening to what are now some of her biggest and most prominent influences, including Ella Fitzgerald, Louis Armstrong, Charlie Parker and Miles Davis.
Upon her return to Dayton she began searching for collaborators with the same jazz touchstones she’d grown to love and rely on for inspiration. Like so many other musicians, her search took her to Craigslist.
“John (Simon) fell like an angel from the sky, after I posted an ad on Craigslist looking for a guitar player,” Nix said. “I had just moved back to Dayton after being in Chicago for eight years, due to a bad break up with my then long term musical partner. I was going through heartbreak, not only because of the end of my relationship, but also because I didn’t think I would ever be able to find someone comparable to make music with.
“When I met with John in the music room of my mother’s house for the first time, it was like fate! He complemented me musically immediately. He mended that part of my broken heart.”
From that point on, the duo began to book and perform shows at local venues performing both covers and original material.
“At this point it’s about half and half. We like to do as much original material as possible, however we also understand that most audiences are going to want to hear something they are familiar with,” Nix admitted. “We try to balance it out, and hopefully as our reputation grows our songs will be the ones the audience becomes familiar with.”
“I think our sound is still evolving,” Simon added.” We both have so many different influences it’s exciting to see them come together. Jazz has been our common ground so there’s always that element, but there’s also a lot of soul and country.”
With her uneasiness about what the future holds quickly transforming to excitement and promise, Nix said she and Simon are in the midst of writing both an EP and LP that plays to the strengths of their sound.
“John already has an entire album of recorded original music that he has released. His album, Hungry Ghosts, can be found on Spotify, ITunes, and will be sold at our shows.
“Our sound as a duo is definitely evolving,” Nix explained. “I think it’s a crossover sound at this point. One of my friends described it as ‘Southern soul’.”
In the meantime, the group plan to continue to hone their sound and show off their songs during live shows around the region.
“We just want to create a chemistry between the stage and the audience that people remember,” Simon confessed.
(John Simon & Corinna Nix perform at Tumbleweed Connection, 454 E. Fifth Street, on Friday, August 28. Mack McKenzie and TruK are also on the bill. Admission is $5. Listen to the duo here: www.reverbnation.com/simonandcorinna.)