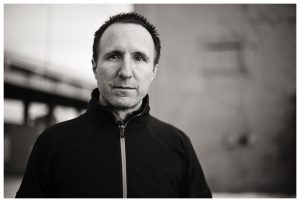 By Tommy Johnson
Since age 15, Mark Kramer (aka Tender Mercy) has been playing in bands. First in Dayton, Ohio and now Louisville, Kentucky.
“Getting to hang out with friends, play loud music and get into bars years before we were legally allowed was always an adventure,” Kramer explained.
He played some sports when was growing up, but it never really flourished and grabbed his attention. Playing music did. Kramer said that he discovered it was the perfect outlet.
“To be able to sit down and alter your mood one way or the other by playing a few notes or chords is still pretty incredible to me,” he added.
The idea of just playing with just vocals and a guitar came to Kramer when he was in high school. With his musical taste in the punk/hardcore scene, a single album changed Kramer’s attention. He purchased an album from Dischord Records, a compilation of songs titled State of the Union. On the album, one of the songs that was included was Red Emma’s “Candle.”
“It really blew me away. I had been listening to punk/hardcore for so long then this song came along all quiet and minimalist and really turned my head around,” Kramer explained.
Immediately after hearing “Candle,” Kramer began to refocus and envision how he would play music going further. However, the execution of this plan was very difficult for Kramer. He was comfortable with playing in the background with other band members in previous groups. He knew eventually that the time would come when he needed to do it alone.
“It was safe to just be the bass player that I was and hide behind the drums and guitars of the punk/hardcore bands I was playing in. Even after I started Tender Mercy I had to have a piano accompany me. Not only because I thought it sounded great but it’s easier having just one other person up there with you. But, I knew in the back of my mind that I would eventually have to go it alone at some point.”
For Mark Kramer, the goal is simple-the make music in the most minimal way possible.
“I think the natural inclination is to fill space with as many bells and whistles as possible,” explained Kramer. “I understand it but I don’t feel the need follow that. I want the music to be as close to the bone as possible.”
Kramer’s new EP, released in February, As Someone Else You Embrace The Moment In Us, features five astounding songs that are a true representation of his vision and the direction that he would like to go with his music. Peaceful. Quiet. The simplicity of the EP offers listeners a breathtaking, tranquil experience. Kramer’s vocals are lasting and serene. The hissing of the tape in each song of As Someone Else You Embrace The Moment In Us only intensifies the simplicity of the production.
Kramer has also released As Someone Else You Embrace The Moment In Us in a limited release of 100 with hand screened covers, which can be ordered on Tender Mercy’s Bandcamp site www.tendermercy.bandcamp.com.
When Kramer is playing live to an audience, it’s an exhilarating experience for him.
“Being alone on stage for me personally is like being completely exposed in every way. Being hyper-aware of everything going on and at the same time (with the right sound person) feeling like your within your own mind.”
In the meantime, Kramer is in the process of recording a five-song cassette and some songs for a compilations under the Tender Mercy moniker, which are all slated for release in the fall.