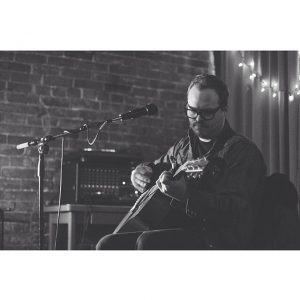 For some religion and music are closely intertwined.
“I grew up in church and that’s where I first started playing music,” Andrew Bryant shared. “I started playing drums in the church band at about the age of 14 and played for about four or five years, until I left for college. I consider those my first steady gigs because that’s where I learned about the power of music.”
For others, religion IS music. It is constant practice, with rituals that bring them closer to a holy awakening with each strummed chord. For Bryant, who is best known for his band Water Liars, both of these qualifiers have been at play.
“I learned that when people came into a place together, ready to be moved by music, that something special can happen,” Bryant observed. “I could feel the energy in the room shifting when I did a certain drum roll, or if the piano did a certain crescendo. I learned how to observe a crowd and measure what a note or chord or drum beat, when played in a certain way, could do to people, and I loved that. I chased that power at every performance. And I still do.”
With Bryant’s latest solo effort, This Is The Life, he chases this reaction from beginning to end. But he isn’t fully willing to acknowledge that the results of his efforts are the product of divine intervention or design.
“I am no longer a ‘religious’ person, nor do I hold to any certain ideology,” he admitted. “These days I’m just more interested in learning about people who have left the faith they were raised with to do their own thing. Those people seem to be producing some of the best work of our time, and I think we’re at a period in America right now where people are less afraid to leave their religious beliefs behind and/or form a new one that better fits our modern society.”
On Bryant’s latest, which combines singer/songwriter fare with gutsy Americana, country, folk, rock and power pop sounds, the output is primarily of his own design. In addition to playing nearly every instrument on the album, and providing all the vocals, he recorded the record in his own home studio.
“I find the home recording process very fulfilling,” he said. “I like to put myself alone in a room and create a thing where there was once nothing. There’s something very godlike about it that I crave.
“With this endeavor, we’re trying to start small and build a sustainable thing from the ground up without going into debt. I didn’t want to just give this album to a label and roll the dice. Also, it just felt good that after 10 years I’d come full circle and (Matt Arbogast of Sleep Recordings) was once again helping me release an album, but this time under much better circumstances for both of us.”
(Visit Andrew Bryant here: http://andrewbryantmusic.com/.)