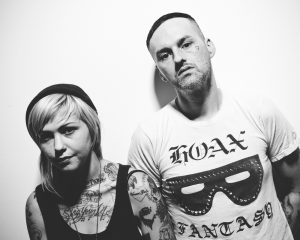 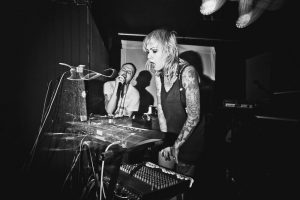 How was the tour with Night Sins?  What were the prominent takeaways for you in terms of lessons learned or experiences you were able to have while doing that?
S: The tour with Night Sins was one of the best, if not THE best tour of my entire life. It was the two of us, Kyle (who does Night Sins on his own) and his friend Andrew (who plays in a fucking awesome band called Salvation with Kyle as well). The four of us lived in a minivan and just cruised the U.S. laughing and having fun city to city. If we encountered anything that bummed us out, the four of us all dealt with it together. It was sort of like  Griswold family vacation though, that even in the parts that were troublesome,  we found humor in them.
The biggest lesson I learned for myself personally is to NEVER let anyone try to give you shit or give you anything less than exactly what you want. It’s so easy to be passive and just let venue people slack off because they don’t feel like putting in the extra work to accommodate you.  But in the end it’s your show that gets viewed as a bummer, not the promoter or sound guy. Be very vocal at all times and stand your ground.
R:  I came away knowing that I actually like touring. I thought I was going to hate it. I really like being at home and having my privacy. I don’t like leaving the house very much. So yeah, I thought it was going to be the worst month of my life. I can’t wait to get on the road again.
I assume that part of your goal is to encourage dancing.  Or maybe it is unintentional.  Are you pleased with the reaction of your fans to the material and how they responded to it in a live environment?
S: I don’t think that we have a goal really. I’ve been very stoked to see that this band has gotten a reaction at all to be honest. We went from two people doing a band as a dare to being something that people really appreciate.  And for that I am eternally grateful. This is a fun ride for sure and I can’t thank people enough for supporting us and letting us continue to be creative.
R: Yeah, we don’t really make dance music in the traditional club sense. People kinda just like, push pit when we play ha ha.  I don’t know…I’m sorta embarrassed answering this ha ha. Yes. We like when people freak out at our shows. It’s cool.
When can we expect you back on the road?
S: We can’t announce the full details yet, but we’re hoping to do a North American run in mid-February opening for a really cool band that I don’t think a lot of people would expect us to tour with. So hopefully then, and trying to be on the road for a while…most of 2014 I hope!
R: We’re just kind of riding along with some bands that are bigger than us for a while. It’s going to rule.
(Visit Youth Code online here: http://youthcodeforever.tumblr.com/, and https://www.facebook.com/youthcodeforever.)