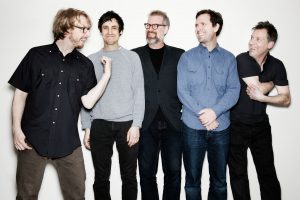 The rain is coming down with ferocity in Portland, Oregon, according to Eyelids members Chris Slusarenko and John Moen during our phone conversation. The two dear friends and bandmates have been resigned to spending the rest of their afternoon indoors. To make the time go by, the duo have each found things to do.
“John is going to help me with my lyrics (laughter),” Slusarenko mentions. “I said to John, ‘Can I show you this and tell me if it’s dumb or not’.”
Moen quickly and light-heartedly added, “After we are done with that, I am going to tell you exactly what we are going to do, I’m going to brush his hair out while looking out a lonely window (laughter).”
It’s truly difficult to find another band that features members who have been an integral part of such influential music. Moen got out of high school in 1986, started touring around, releasing some albums with Dharma Bums. Now, he is currently the full-time drummer of Decemberists.
Slusarenko’s career has spanned from only doing cassettes and stickers with his band Deaf Midget for five years, and starting the group Sprinkler that was signed to Sub Pop after less than a year. Other highlights included a stint with Guided By Voices as the bassist. His other project besides Eyelids includes Quasi’s Sam Coomes that also involves Eyelids drummer Paulie Pulvirenti.
Slusarenko and Moen explain that they have just wrapped up what will be the final album with Boston Spaceships, Let It Beard. With the lead singer being the fearless leader Robert Pollard, Slusarenko and Moen’s Boston Spaceships released five LPs and three EPs.
While the duo was playing the album for some friends before the release, Slusarenko found three rough demos that featured just himself and Moen. Once the demos ended, Moen was thrilled on what he was hearing, and shouted out that they needed to get the ball rolling again. For the two musicians, it was the perfect opportunity to have an opportunity to have a band that they were able to write songs, which both were passionate about.
Slusarenko and Moen, along with Let It Beard’s producer Drews, went into the studio for two days to expand on the demos. Inside Drews practice studio, the trio began to exchanging ideas with one another, and landed on thirteen songs that made up the skeleton for what became 854. With the additions of bassist Jim Talstra, and drummer Pulvirenti to the group, some of the songs were re-recorded to have their parts included into the album. 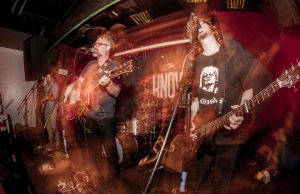 “It was a really weird to go about it, but also allowed us to a chance to figure out what the hell we were about,” Slusarenko says.
854 captures the essence of catchy, pretty pop-drenched songs that are filled with melancholy and buoyancy.   Loud guitar riffs and fuzz dancing on top of one another, with whimsical vocals throughout each song. Slusarenko mentions ’80s bands like the L.A. Paisley Underground darlings, Rain Parade and Dream Syndicate, with New Zealand’s own Straitjacket Fits being overwhelming inspiration for what they envisioned to have their music sound like for their newly formed group.
With the momentum of releasing 854, Eyelids just went into the studio in November to record an EP with R.E.M.’s Peter Buck, which is hopeful to be released in the beginning of 2015. However, with everyone’s unpredictable schedules (including the Decemberists soon to be releasing their latest album), the members of Eyelids have no qualms on what the future is going to hold for them.
“I have a little apprehension about how everything will play out,” Moen says. “So we will keep taking a little at a time, and see what we can get away with when we can get away with it (laughter).”
“As long as we can stand each other, and we like what we are doing-it’s not that hard for the five of us to want to be around each other,” Slusarenko says. “It’s kinda of like, ‘Alright, I’m with these guys. Cool!’ History makes it a little easier.”
(Visit Eyelids here: http://musicofeyelids.com/.)