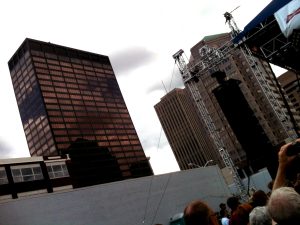 Downtown Revival – Saturday & Sunday, September 8-9 in Dayton, OH
By David C. Obenour
As Ghettoblaster’s editor, I am proud to choose to be based out of Dayton, Ohio. Not New York City, not Los Angeles, not Chicago and not even Cleveland – no disrespect to any of those places, two of which I’ve lived in – but I’m happy here.
You may think you know about my hometown from what you read about the Wright brothers in middle school history books or the Dayton Peace Accords in high school history books, but there’s a lot more. There’s funk, there’s rock, there’s soul and most importantly, there’s an innovative spirit that lives on to this day. The Downtown Revival’s organizer, Matt Luongo sought to bring all of this together right in the heart of the downtown Dayton to show everyone and by in large, he succeeded at it.
Starting out Saturday, there were a number of lesser-known local acts scheduled as the volunteers and organizers worked through the kinks and final preparations that come from a first year festival set in a non-traditional location. Wheels is definitely one you should be hearing of soon. The gimmick is that most of them aren’t old enough to drive, but the follow through is that they play an incredibly infectious and melodic new generation of Americana. The Motel Beds are another gaining momentum with a sound that harkens back to the eclectic lofi rock sound of Brainiac, The Breeders and Guided by Voices that once got Dayton dubbed, “the next Seattle” by Spin Magazine. Full disclosure: I’m actually helping these guys for their next album. Doubly full disclosure: I’m doing so because they fucking rock. 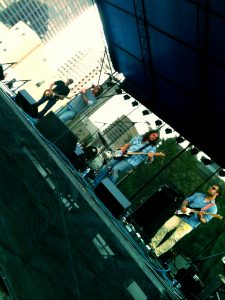 With everything more or less in order at the festival, the stage was literally and figuratively set for a band that’s put Dayton on the map for over the last two decades for many fans worldwide. The setting couldn’t have been more perfect and Guided by Voices were firing on all cylinders, playing in front of what was probably their largest hometown audience since X-Fest at the Montgomery County Fairgrounds in 1999. Though known for their marathon performances, the roughly hour and a half festival slot saw the band tearing through a number of songs from their four new albums along with a smattering of old classics, including the first post-reunion performance of “If We Wait.” Yup, that’s pre the “classic era,” so apparently all of the songbooks are open and fair game. Looks like I’ll be needing to buy some more GBV tickets in the near future. 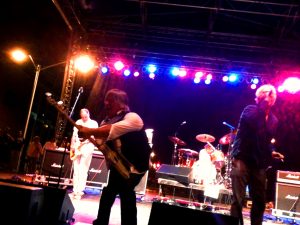 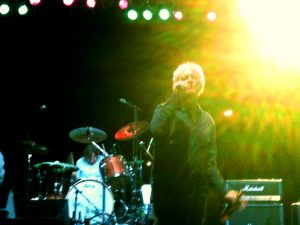 After that it was a short drunken stumble over to the backside of the throng that had gathered to see neighboring Springfield, Ohio native John Legend. Now I’ve never really listened to much of Legend’s music and what I have heard I respect but don’t really get into. That all might change after seeing the amount of soul he poured into his headlining performance. For as much as you can tell about a performer from being 150 feet back, Legend seems like a remarkably genuine dude with a lot of love from where he’s from. 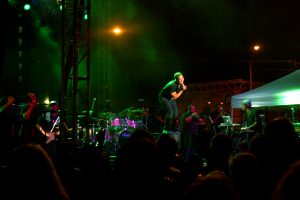 Starting day two off with a talented ex-pat, The Heartless Bastards were another stand out from the weekend. Though now based in Austin, the band still has a loyal following of friends and family here, the latter of which were easy to pick out with their white hair and band t-shirts tucked into pleated khakis. God bless supportive moms, dads and grandparents. Odds are good that you’re fairly familiar with the band given their success, but if you haven’t caught them live yet you’re really missing out. The dusty Americana can get pretty damn rocking. 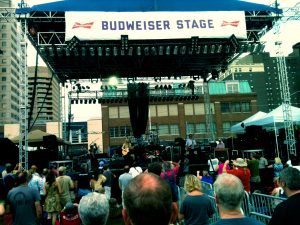 After their set, as a true Ohioan, I took a brief break to watch the Browns lose in the most frustrating way possible. Probably a bad choice, but it’s too longstanding of a masochistic ritual to break now.
Another great local act, The Buffalo Killers quickly cast off the post-game blues. Once hand-picked by The Black Crowes as an opener, what you get is a mix of Neil Young, The Allman Brothers and Lynyrd Skynyrd as interpreted by much younger hearts and hands. 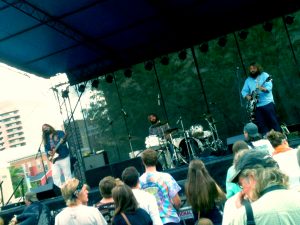 I was looking forward to seeing The Ohio Players ever since they were announced, but I didn’t really think anything could come close to Guided by Voices’ set on Saturday. Even as a rabid Bob fan though, there was no denying it’d be hard to pick a favorite between these two. Ripping through decades of hits including “I want to be Free,” “Fire,” and “Love Rollercoaster,” forty years past their heyday, The Ohio Players are funkier than all y’all. Here’s hoping future Revivals can draw from some of the other acts from Dayton’s funk past, including Zapp & Roger, Heatwave, Faze-O, Sun, Slave, Lakeside, Dayton… the list goes on. 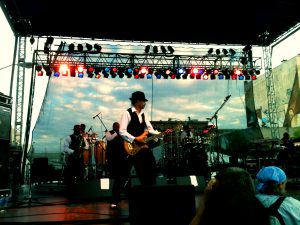 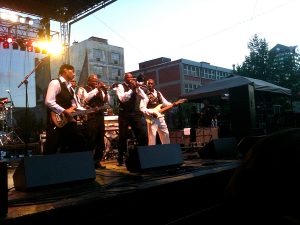 After The Ohio Players, The Revival still had performances left from Train and Robert Randolph, but my festival was complete. It had featured some of my city’s best music from the past, present and still-to-come. Thanks for the good times!