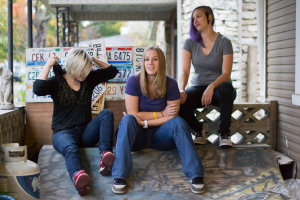 After emerging in 2007, Jasper the Colossal became one of Dayton, Ohio’s most ferocious rock and roll bands. In addition to leaving sweat on nearly every stage the city had, Jasper also played all over the country, including shows with R. Ring, Girl in a Coma, The Dollyrots, and Hunter Valentine. The band was also active in the studio, recording and self-releasing an EP (Prehistoric) and a full-length (Liar). And in 2013 they disappeared.
After a year-long hiatus, in which the band to regrouped and wrote, Jasper returns with a hometown show on November 8 and plan on hitting the pavement hard in 2015. They are also scheduled to begin recording a follow up to Liar this fall, with hopes to release a single and video by the end of the year.
Ghettoblaster recently caught up with Jasper’s Paige Beller to discuss the band’s legacy and future plans. This is what she said.
For those who’ve not heard Jasper The Colossal, how do you describe the band?

We like to dance up and down the lines between punk, indie and good old fashioned rock and roll.
You also have several other musical projects going.  How do you know what is a Jasper song and what is best for another project?
I’m lucky to be in different bands of different genres. It keeps my multiple musical personalities happy. Jasper generally writes together, with me writing the lyrics at the end. However sometimes I’ll be playing around and something will just hit me. I feel like Jasper has little unique things about it that make it ours, and it’s usually pretty obvious to me if I start to fall into that while writing on my own. Then I present it to Sarah and Moriah who help to develop the rest.
Is it difficult to still find the same energy to put towards a band after seven years?  What is it about your partnership that makes it work?
I think being in a band can be hard for anyone. It’s a very emotional experience and sometimes things don’t go the way you’d hoped. I think that Moriah, Sarah and I have managed to get inside each other’s heads and really know what to expect from each other as people. The energy has been there pretty consistently through the years, but we definitely noticed a sort of lag before our last show. I think that contributed to us taking some time off. Refresh and regroup. Now we’re looking to come back hard.
What can we expect from the follow-up to Liar?
There are some songs that people will recognize from the live shows. It’s given us a lot of time to really think about those old-new songs and develop them live, which is always nice. We’ve also got some new-new songs for the November 8 show, and will continue to write and start the recording process through the winter. The latest songs we’ve been working on still have the same flavor, but we still haven’t written that catchy fast paced punk song we’re familiar with. It seems that we’ve taken a bit more of a layered approach. More backing vocals, more texture. And we’ve been a bit mid tempo lately, so I think this full length will have a kind of wavy feeling to it.
Where are you recording it, and how did you decide that would be the right environment for the record?
We will be doing a bulk of the recording at a studio outside of Richmond, Indiana. We recorded Liar there with our friends Greg and Jerry engineering. It’s a really cool converted farm house in the middle of nowhere. It forces us to focus and really buckle down. We wake up early, record all day, break for Mexican food, and then record some more.
Is the record completely written?

We’re about nine songs deep into the next album, but we’d like to get a few more together to round it out.
Will you be looking for label support for the record or self-releasing it?
We will be self-releasing unless something comes along. It’s still pretty early in the process at the moment. So if you know anyone who’s interested…
In the past you’ve played with nationally recognized rock acts like R. Ring and Girl In A Coma.  What were those experiences like?

It’s pretty incredible to get to share a stage with someone so significant as Kelley Deal. When we were asked to play the show at South Park Tavern with them, we were stunned and scared as hell! But Kelley and Mike are so very down to earth and nice.
Kelley invited me out to sing and play guitar on a video with her, and it was completely surreal. I was homeless at the moment, crashing a buddies futon and without any transportation, so I got dropped off in front of her house, just a complete wreck, thinking the whole time “Keep it together….this is Kelley-fucking-Deal!” The whole thing was so cool.
As for Girl In A Coma, I cannot say enough about that band. As people they’re nice as hell, as a band they are one of my favorites, and their live show is so inspiring. I have definitely picked up a thing or two from watching Nina destroy her guitar, and they have certainly influenced Jasper on many levels. Plus, playing with any band that I admire like that really makes me up my game. I’ve been really lucky to find that the people I look up to are generally pretty awesome.
Will you be touring in 2014 or 2015 in support of the record?
I sure hope so! We really want to start working the surrounding areas, Cincy, Columbus, Indianapolis, and start to build a base. We’ve done the long tours in the past, and it’s a great experience, but it’s so hard to get back there in a timely manner so that people stay interested. I’ve been really trying to pick the brains of the working musicians I know, and it’s really made me rethink how I look at booking. That being said, I’d still like to get out west again. And south. Everywhere really.
(Visit the band here: https://www.facebook.com/jasperthecolossal.)

If you don't know @kingropstyle, let me introduce