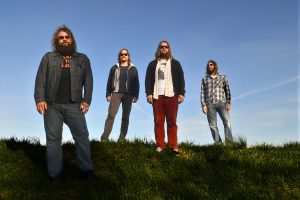 When Sun Pedal Recordings released Heavy Reverie in the spring, fans of bearded, blues rockers Buffalo Killers believed they were enjoying their yearly helping of hook heavy, homegrown rock from the band. So it was a surprise this fall when the band announced that they’d finished the record’s follow-up, with Jim Wirt (Incubus, Fiona Apple) at Crushtone Studios in Cleveland, and planned to release Fireball of Sulk on November 24.

As prolific as the band has been in the studio, 2014 has seen the band staying busy on the road as well. Buffalo Killers went coast to coast on a national tour, including visits to the annual South By Southwest music conference in Austin, Texas, and to the studios of late night talk show host Carson Daly for a television performance.

Ghettoblaster recently spoke with Zach Gabbard, whose younger brother Andy is also one of the band’s primary songwriters, to discuss the forthcoming release, some of his favorite recent releases, swimming pools and movie stars.

Fireball of Sulk is being released hot on the heels of Heavy Reverie, which was also released this year?  Did you write and record those records separately?

I’ve always wanted to release two albums in the same year. We rehearsed and recorded Fireball of Sulk over two days last December. The Heavy Reverie sessions, recorded in August 2013, with Jim Wirt went so well that Sun Pedal invited us right back up to do another.

What were you hoping to accomplish artistically with Fireball of Sulk?

It’s difficult to understand the process. I don’t understand the why, but I know we’ve had a prolific last few years. The songs that are pouring out are genuine reflections of where we were and are in life. I guess artistically we just wanted to stay true to ourselves.

You guys already shared a video for “Weird One.” What was the idea behind that song?

It’s a song about being young. Rebellion via hair dye and seclusion.  Those days are long gone, but not forgotten. There is tragic beauty in that and those days and I appreciate them more now that I’m a parent.

Everyone always wants to talk about obscure bands.  I love today’s sounds too. Blitzen Trapper, Father John Misty. That new Tweedy is wicked. Spencer Tweedy is my second favorite drummer, Joey (Sebaali) being number one.

Earlier this year you guys made an appearance on Carson Daly’s late night show.  What was that experience like?

Pretty wild. We were in Los Angeles for a few days. Alive Records put us up at a fancy hotel. Swimming pools and movie stars.

Were you tempted to ask him what ever happened between him and Jennifer Love Hewitt?

I noticed that you produced Handsome Jack’s album, which dropped in October.  How did you meet them and what was that experience like?

We’ve been playing shows with them since our first record came out. They are a great band. We recorded it at Candyland in Cincinnati over a weekend in February. They did it live. They went home and I lined up some backup singers, harmonica and Bob Nave, from The Lemon Pipers, who plays Hammond organ on a tune.

Is production something you’re as passionate about as you are playing?

If music lore is correct, you guys may have had some help along the way from Dan Auerbach (The Black Keys).  Is lending that credible thumbs up to bands like Handsome Jack your way of “paying it forward?”

Yeah. We’ve had some great folks sing our praises over the years. It’s so hard to get your foot in the door. So many great bands and songwriters sit around and wait to be discovered. That shit doesn’t happen. You gotta get out and get it.

At this point is music your full-time day job?  If not, is that even something that you are interested in?

I’m a stay at home dad. Best job ever.

What other goals have Buffalo Killers not yet achieved that you’ll be chasing in 2015?

We are gonna get our studio together on my farm. Howler Hills coming soon.