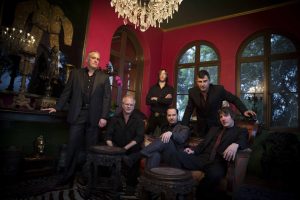 (Editor’s Note: This feature was originally published in Ghettoblaster Magazine issue #38.  Issue #39 is on newsstands now.)
Though The Afghan Whigs frontman Greg Dulli long denied that the powerful rock band would ever reunite in an official capacity, long time Whigs fans kept fingers crossed, holding out hope that Dulli’s occasional gigs with John Curley would spark a full blow reunion for the former-Cincinnati outfit.  What fans didn’t know, was that Dulli was bonding behind closed doors with Whigs guitarist Rick McCollum during the Twilight Singers 2011 spring tour, and that the seed of reuniting the band was taking roots.  In November 2011, the three convened for several days in New Orleans, conjuring an old black magic that had been kept under wraps for years.
Originally formed in Cincinnati in 1986 by the core trio of Curley, Dulli, and McCollum, the group combined sheer volume, audacious personality, gritty soul immediacy, and swinging musical chops; a sound that propelled them to the top tier of Cincinnati’s music scene almost immediately and later captured the attention of a small, fledgling label out of Seattle called Sub Pop. Sub Pop signed the Whigs in 1989, and the group commenced to rearrange the landscape of ’90s alternative rock (amidst contemporaries like Nirvana, Tad and Soundgarden) for years as one of indie rock’s juggernauts.
The band’s landmark albums Gentlemen and Black Love (which were released by Elecktra) saw the band getting MTV airplay, they made appearances on network television, and the Whigs embarked on larger and larger tours.  The band’s sixth and final album, 1965, for Columbia would unfortunately prove to be the core trio’s final album together.
Although Dulli continued making music with The Twilight Singers and The Gutter Twins (alongside Mark Lanegan), and McCollum and Curley have remained forces in independent music in Minnesota and Cincinnati respectively, longtime fans of the cult band always felt like the Whigs story had a few additional chapters that were left unwritten.
In December 2011 it finally happened – the band announced that they’d be doing appearances at All Tomorrow’s Parties festival in London in 2012.  Dulli also signed on as the curator for ATP’s stateside edition on September 22 in Asbury Park, New Jersey.  Though this was exciting news for many fans, and the Whigs pacified us briefly with covers of Marie Lyons’ “See and Don’t See” and Frank Ocean’s “Lovecrimes, anticipation of a full blown U.S. tour and perhaps an album, kept diehards chomping at the bit. The tour happened and it was remarkable, showing a band who was hungrier after years of inactivity than perhaps they were in their earlier prime.
Do To The Beast marks the triumphant return of the band to both their onetime label Sub Pop, and recording in an official capacity. Although Rick McCollum is absent, and details surrounding his departure are sketchy, Afghan Whigs unleash and deploy their arsenal of aural dark drama and suspense in ways that only a troupe with years of unrelenting practice in pop vitriol can, leaving fans satiated and satisfied.
Ghettoblaster recently chatted with Dulli about the catalysts that brought them to these killer new heights
When we spoke in 2012 you were pretty non committal as to whether a new album was in the works for Afghan Whigs. Had the possibility of doing a new record not occurred to you then?
Not really, no. I was just kind of rolling in the moment man.
At what point did you turn to John Curley and say this is something we should think about? Or did he bring it up?
He brought it up to me after the Usher gig at SXSW in 2013.
Was there a creative spark at that gig that put it on the “to do list” for you?
The experience of putting together that show…we basically had 48 hours to create a show and perform it with Usher at South By. And it kind of reminded me of being a teenager and having a gig a few days away and having to make a show. I hadn’t really done anything like that in a long time. It was a joyful experience for lack of better words.
So it brought fun back to what you’d been doing as a career for a long time?
I like to think that I’ve always had fun, but sometimes there is a moment that you are like…there was something about that experience that I hadn’t felt in a while. And after we performed it, at like 6 in the afternoon, when we were back at the hotel having dinner it was resonating. And that’s when John asked me, “Do you want to try to make a record.” I said, “Let’s book some time and see what happens.” So that was mid-March and we took some time in early May and we were on our way.
Was Usher involved in the record in any way then?
His guitar player plays on one song. Usher himself was not involved.
But really exciting for the Ohio contingent is that you’vee collaborated with Mark McGuire of Emeralds and Ahmed Gallab of Sinkane…

Ahmed isn’t on the record, but he did one of his songs at the South By Southwest show. And he performed with us, but he isn’t on the record Mark McGuire is on the record. He performs on half the record having played on five songs.
How did you meet him and how did he become involved?
I actually got him a scoring job in LA. A friend of mine was producing a film, but I don’t think it ever came out. It had Brian Cranston in it. Anyway, they need a composer and I recommended Mark. At that point, I still had never met him. But they listened to his music and hired him and I met him later when they took him out to dinner…they invited me. So I met him at that dinner a couple years ago and we’ve been friends ever since.
That said, you’ve never been shy about collaborating, and allowing that interaction to ignite a fire in you. Have other core members of Afghan Whigs always been on the same page in that way?
I’ve met a lot of people along the way and I’m not shy about introducing myself to people that I’m a fan of. In that respect, I guess I would be the driver. But I’m also not imposing my will on anybody. It is accepted by all.
There was one former collaborator noticeably absent. Without getting too far into the weeds on this question or too intrusive, was it weird to do the record without Rick McCollum involved?

Weird? No. The writing was kind of on the wall with Rick during the tour. I think that may have been why I was noncommittal about a record doing the tour. It was kind of a liberating experience…I have nothing bad to say about Rick. I love him. But Rick has things to work out in his life before he can be creative or otherwise with anything that I have anything to do with.
Several years ago, I had a friend who was touring the a musician who was in an infamous and storied alt-rock band in the ’90s. Things were on the rails for a while and then being in those old situations where temptation is heavy made that sort of a miserable experience for all involved. Was that kind of thing going on there?
No, no. It’s more of a personal issue. I’ll just leave it at that.
Over the last couple decades I imagine you’ve seen more than a few people you may have at one time considered contemporaries have their trains jump the tracks in terms of their output losing focus or poignancy amidst their fanbases.  How have you managed to avoid these pitfalls?
Um…switching groups (laughter). That is one way of doing it. I like everybody else do what I do and try to believe in it to the best of my abilities. Chances are if you are feeling something and you have a way of expressing yourself that folks have come to enjoy…I’ve never had a huge audience anyway. But I’ve been very lucky in that this group of people have adopted me and taken me in as one of their own. That is my fortunate lot in life. And I’ve hopefully made music that they’ve enjoyed over the course of this long career I’ve been fortunate enough to have.
Sure. Is Do To The Beast an album that had been bottled up for 16 years or is it more a document of the time and place for where Afghan Whigs today? Is it a little of both?
I think it is a document of its time and place. It happened really fast. It happened organically. It was the outcome of circumstance really.
Much of the album was recorded at Josh Homme’s Pink Duck studio. How long were you there and what was that creative environment like for you guys?
He has a great studio and a great engineer named Justin Smith who works there. We did two different sessions there. He’s got a great board, great gear, a great live room, great microphones. You’d have to be fucking up not to pull something great out of there, you know?
He’s an opinionated sort of personality. Did he pop in and weigh in on what you were doing at all?
No, he was there the first day when we arrived to welcome us to the studio and then he was off on tour.
The video for “Algiers” was the first that fans got a taste of, and it had perhaps a significantly different flavor than everything you have done before. Were you throwing fans a curve ball?
No, it was just a song we liked. I don’t know if you have heard the record, but there are some curve balls to throw. We have a repertoire of pitches. There are curve balls, sliders, screw balls, fast balls, knuckle balls. We have it all.
You approach, a soul and blues based approach, has always been sort of a distancing factor between you and your peers. It was apparent in the ’90s while the grunge movement was happening, and it is apparent now. I don’t know that there are a lot of folks playing in the same ballpark you are. Do you believe that or see it differently?
I don’t really see us doing anything that the Rolling Stones didn’t do. There are styles of music that turn you on and you appropriate the parts that work for you and that you can perform sincerely and you do what comes naturally. Making this sound is as natural to me as falling asleep or making love. So it is nothing I think about constantly to be honest with you.
There has to be a confidence level now, at this point in your life, that may have not have always been there with relationship to the Afghan Whigs. How important is having confidence and being self assured to your success?
It has been there for me since I tried out for the basketball team in third grade man. You have to dare to fail in order to succeed. While I’m just like anyone else and have my doubts and insecurities, you can’t let them own you. Confidence is a way of life.
So having swagger is a key element of success?
Believing in yourself is a key element of success. If you don’t, no one will.