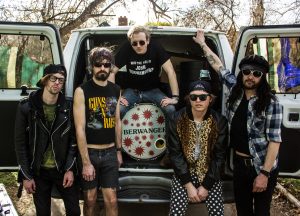 Josh Berwanger is a rock and roll lifer; first making a name for himself as guitarist for The Anniversary, then putting together The Only Children in the wake of The Anniversary’s Fleetwood Mac-style breakup. These days he fronts his own rock act, Berwanger. The band will release their latest in December, a six-song EP (via High Dive Records) that follows their much lauded 2013 release, Strange Stains. The album was recorded at Element Recording in Kansas City, Missouri.
Ghettoblaster recently caught up with Berwanger to discuss the forthcoming EP, working with The Breeders Jim Macpherson, “partying” with The Donnas, and more.
You’ve been involved in the music industry for a long while now.  In what good and bad ways have you seen it evolve?
I’m sure for everyone it is completely different. I’ve seen some friends go on to have a lot of success whether it be on the business side or artist side. While others have struggled given up or just kept it as a local band. I place what we are doing in the middle of that. We work really hard and have been touring a lot with no label support at all. But, by touring so much we are going into our fourth pressing of Strange Stains on vinyl on a label (Good Land Records) that doesn’t have distro. So that is rad and we thank all the people who have bought it and realize that is from touring and working hard.
There was a point when Only Children was touring in 2007 or so and no one was buying anything format wise. Now more people are getting back into wanting to hold something and own something, like vinyl, cassettes and CDs and that is a great thing for touring bands. I’m going to stay positive and not comment on bad ways the industry or music itself has changed, I’ll get too stressed out.
You got a little help on the record from someone from our neck of the woods, Jim Macpherson.  How did that collaboration come about?  What’s your favorite Breeders song?
Jim is the absolute best. I had a bunch of songs I wanted to record and a buddy of mine (Marc Benning) and Jim own a studio in Colorado. I needed a drummer so he sent the demos to Jim and Jim was into them. So we both flew out to Colorado and recorded 10 songs. A few of those made it on Strange Stains.
Oh man, hard to pick just one Breeders song. Can I just say Last Splash, I love that whole album. I’ve also really been digging Kelley and Mike Montgomery’s band R.Ring.
Did I see that you coached basketball?  Do you follow collegiate or NBA basketball?  Who are your faves?
I did. I was a head JV/varsity assistant High School Girls Basketball coach for seven years. I needed a break from music.
I love the game of basketball, I love playing it, learning about it, and teaching it. I like teams with good programs and coaching staffs. It’s hard for me to dislike any team. If basketball is on I’ll watch it, girls, guys, high school, Euro-ball, etc. it’s a great game!
Are you still in Kansas City?  If so, is that scene like it was in the ’00s.
Right now I’m in the middle of Lawrence and Kansas City. They are super close in distance and yet both have their own scenes and both have a lot of cool music going on right now. I wouldn’t know how to compare the ’00s to 2015. I feel KS/KC has always had a very strong music scene.
How do you hope people describe your current band to their friends?
It’s rock n’ roll music. That’s vague I know, I mean, some people think Hootie and the Blowfish is rock n roll music. Sooooo, I hope they say we sound like Hootie and the Blowfish.
Your new EP, Demonious, is a little like Guns N Roses Lies in its delivery. Was this intentional?
It wasn’t intentional, we had three songs that were rockers and three that were more acoustic. When we were trying to come up with a tracking order I started thinking about Lies and liked how GNR made the A-side rock and B-side acoustic. It also showed another side to GNR, ya’know they weren’t just a bunch of scuzz-rock n’ rollers.
What were you hoping to accomplish with the EP?
Our first album Strange Stains came out two years ago now, we’ve had several 7”s come out and a few months ago finished up recording a new full-length. We realize at this point in the year the full-length won’t come out until Spring of 2016, so we wanted to get some new material out.
Is there a theme or underlying catalyst you were hoping to tackle with these songs?
There is no major theme on this EP.  The songs are about love, mental illness, and heroin. 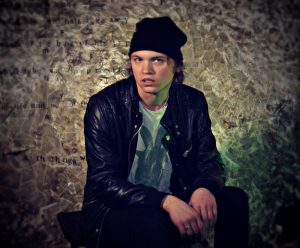 Are you always most proud of the latest piece of music that you’ve worked on or is there something from your back catalog that stands out as your best work?
I’m very happy with the full-length we recorded that has yet to come out. I’m also fully removed from the moment of making the new album and can say/feel it is one of the best records I’ve been a part of making.
What is your favorite moment on this EP?
Ricky Salthouse (lead guitar/backing vocals, and also played the Only Children) and I collaborated on “Her Crystal Room.” I really love that song and it was the first time I’ve written with someone else since The Anniversary days.
With your previous bands, you were playing pretty substantial support gigs as well as decent sized headliners, right?  Do enjoy more intimate rooms with a smaller audience or do you always want to play for the biggest crowd possible?
Being a band that is constantly touring we want to play to people so we can continue to tour, any size room is cool with me as long as the room is engaged. Our goal is to consistently play to 200-300 people every night.
Do you have any fond memories of playing in Ohio?
I have some very fond memories of Ohio. After an Anniversary show Jim and I went to a “party” in The Donnas hotel room. On their next album they wrote a song about us called “Who Invited You.” They also made a video with dudes who are supposed to be us. But the video is way over exaggerated. There were like seven people at the party and they were all eating fast food and watching TV.
Would you ever consider doing a reunion run with Anniversary?  If yes, is it a possibility?
Anything is possible.
What is next for the Berwanger Band?
We are heading out for a short tour, playing some shows opening for Boys Life. Then the first week of December the Demonios EP comes out on High Dive Records. We will do some shows around then to promote it.
(Visit the band here: http://berwangermusic.com.
Catch them live here:
10/18/15 – Tree Bar, Columbus, OH
10/19/15 – TBA, Pittsburgh, PA
10/20/15 – Black Cat, Washington, DC, opening for Boy’s Life
10/21/15 – Music Hall of Williamsburg, Brooklyn, NY, opening for Boy’s Life
10/22/15 – Cincinnati, OH, The Drinkery
10/23/15 – The Spot Tavern, Lafayette, IN
10/24/15- Replay Lounge, Lawrence, KS w/S (Hardly Art Records)
11/21/15 – O’Leavers, Omaha, NE
11/30/15 – Record Bar, KCMO, opening for the Get Up Kids)