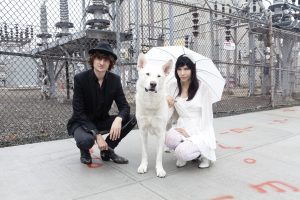 (This feature originally appeared in Ghettoblaster Magazine, issue #38.  Pick up issue #39 at a newsstand now.)
Carley and Jonny Wolf carry the name The Ghost Wolves proudly and deservedly.  It’s both a symbol of the band’s sound and a nod to Carley’s ranch upbringing among hybrid wolves. As their moniker suggests, this Austin, Texas husband and wife duo deliver raw blues, garage rock and American roots that’s ferocious and primal.
The band has been rabidly touring the country since releasing their debut in mid-2011. Despite their young ages – mid-‘20s – both have been lifelong devotees of the rock lifestyle. Multi-instrumentalist Carley fronted her first rockabilly group at age 14, performed internationally as a backing musician with several groups, and as bassist for Johnny Falstaff.  Similarly, Jonny has toured and recorded with everyone from Gregg Ginn to Junior Brown.
Their new album Man, Woman, Beast hit shelves in May on Nashville’s Plowboy Records, home to records from label partner Cheetah Chrome of The Dead Boys, Buzz Cason, Bobby Bare, Chuck Mead, JD Wilkes & The Dirt Daubers, Paul Burch and an all-star tribute to Eddy Arnold, who’s grandson Shannon Pollard is also a label partner.
“Man, Woman, Beast is us in a literal sense; a man, a woman, and our 120 pound beast [a wolf hybrid] who goes everywhere with us,” Jonny says. “But also, metaphorically, this band is a beast, for us personally.  It is all consuming, everyday, we’re working on this, writing, touring, recording new songs, booking gigs, making videos, merchandising, handling the business. It’s a full time job and then some.
“We’re also big fans of music that isn’t sugar coated, because life isn’t sugar coated.  So we always include the dark, the violent, the uncomfortable in our music along with the sublime, the love, the good things,” he adds.
There is lots of “good” to be had on the album. Written in a secluded rehearsal den in Knoxville, Tennessee in the summer of 2012, the band enlisted the help of a production team consisting of Gordy Johnson (of Big Sugar) and Ben Richardson to bring the songs to life.
“They really helped facilitate a good-vibe environment in the studio for us, helped keep things on track, and most importantly wear our ear extensions in the control room,” Jonny recalls.  “They did not at any time try to dramatically change our sound or alter our dream for this album.  They truly were there to just help us amplify what we had in mind and attain it in the best sounding way possible.”
Also helping out was Howie Weinberg, a man whose work is present on some of the most influential rock albums of all time (Beastie Boys, Nirvana, Metallica) mastered the album.
With nothing but a four-piece drum kit and an electric guitar, The Ghost Wolves create a huge sound. “Gonna Live,” shows similarities to The White Stripes. “Baby Fang Thang,” showcases Carley’s bare-boned electric guitar and devilish vocals. And the heavy, femme fatale track “Shotgun Pistol Grip,” recorded on Carley’s signature one-string guitar, was recently featured on this season of Shameless.
One track that didn’t end up making the final cut features a rather unlikely collaborator. “There’s an unreleased version of ‘Gonna Live’ in the vault that has Bushwick Bill from the Geto Boys rapping on it,” Jonny says. “We haven’t had a proper hang with him yet though. We had already left for tour when he came to the studio late one night and Gordy showed him the album. Apparently he dug it, and decided to lay down some of his sweet goodness on one of our tracks, for fun. Not sure how we will release that one yet, maybe as a limited edition single.
“We did see him perform one night at The Continental Club in Austin with Gordy’s drum/guitar duo Sit Down Servant. It was a very late weekday set, like 1am or something and he had everyone in the room in the palm of his hand, just vibing along with him. He’s magnetic, cheerful, and honest, in the moment. With the duo behind him, Gordy on foot bass synthesizer and slide guitar, and the drummer laying it down, it sounded like some incredible music from the future.”
Speaking of the future, it remains both bright and busy as The Ghost Wolves hit the road in support of Man, Woman, Beast.
“We’re going to be touring pretty non-stop,” Jonny says.  “It’s what we love to do; just play shows and hopefully take some time to write in the winter around Austin.  But the fun part about all of this is that things tend to change daily, so we’re always waiting to see what’s around the corner.”