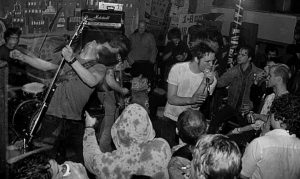 The Party of Helicopters

It is hard for me to put into words the impact that The Party of Helicopters had on me in the ’90s and ’00s. Comprised of members of Kent and Akron area bands Harriet The Spy, The Man I Fell In Love With and others, the band was a noisy punk tour-de-force with metal and shoegaze leanings unlike I’d heard before, and unlike I’ve heard since. Simply, they remain my favorite band 20 years later.
Just when the band seemed to be picking up serious steam (releasing their last record with Velocette) and receiving recognition from all the right tastemakers in the press, they pulled the plug. However, fans of the band continued to receive the considerable benefits of their musical chops. Members of the band went on to play with Teeth of the Hydra, Houseguest, Drummer, Beaten Awake, Relaxer, Ultrasphinx and more. And they’ve remained friends and collaborators, reuniting occasionally for a “reunion” show, and in this weekend’s case, two.
Ghettoblaster Magazine caught up with Party of Helicopters singer Joe Dennis and guitarist Jamie Stillman (who also owns boutique pedal company Earthquaker Devices) to discuss the band’s reunions, why they called it quits in the first place, and their favorite accomplishments as a band.
Party of Helicopters have been on mostly permanent hiatus for several years, although you regroup occasionally for shows?  Are these reunions?  Can we expect these kinds of shows to continue to crop up?
Joe Dennis: I guess I think of them as reunions now. When the band first “broke up” I feel like it was pretty clearly stated and understood that it would be the end, but over the years it’s occasional felt a little less so. our lives are all different now and I don’t see us as ever being a consistently active band again, but we have talked about finishing a recording that we’d started. I know I felt good about those songs and was excited to make that record. If nothing else, I think we’d all like for that to be a thing that happens eventually. We’ll see, I guess.
Jamie Stillman: I guess they are kind of reunions. It doesn’t take much for us to get back together and play a few shows, pretty sure someone just has to ask. Although Cory (Race) moved to Brooklyn a few years ago, the rest of us all live close to each other and we are all still friends so it’s kinda easy to do. I would be willing to do as many as we can within reason, I’m sure the others feel the same way. It’s easier to do now that we don’t have to worry about touring or writing records.
Do you find that fans of the bands migrate to these reunion gigs?  Do people come from far and wide to see these?
JS: There are a few people who come in from out of town but it’s nothing crazy. These upcoming shows on the 23rd and 24th seem like they have a fair amount of people coming in from far away. They are the first shows we’ve actually publicized. The last time we did it we let people know like the week before. We were never very good promoters.
Why did the band go silent in the first place?  Was it an official split?
JD: I think we were just burnt out. That last year or so started out feeling like the beginning of something really good. We’d finally gotten to a point where we were able to (almost) make a living as musicians. It was exciting. We hit it pretty hard and I think we were all pretty optimistic, but it just wasn’t sustainable. That last year passed and at the end of it, the fantasy beach house only felt further away.
I really don’t know why we split, honestly, but when it happened, I don’t think any of us thought it was a terrible idea. I remember mostly being bummed that I wouldn’t get to travel as much. It wasn’t too long after that i began to realize all that Jamie had done and to how great of an extent that I was really just along for the ride. It took me almost nine years to get another touring band together. Almost that long just to start another “serious” band.
JS: Basically, I quit. After nine years of booking shows, dealing with labels, touring in shitty vans and not getting paid it just didn’t seem to be appealing to me anymore. I lost the punk rock spirit I had when we started, playing to 20 people and getting paid $4 in change after driving for 12 hours was no longer fun or sustainable. 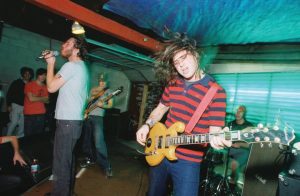 What were your favorite accomplishments with Party of Helicopters?
JS: Just getting to travel and play music, it was all I ever wanted to do. We never tried really hard to “make it” or anything like that so anytime we got mentioned in major publications it was on their own accord, that was always nice.
Joe Dennis: My favorite accomplishments were just the places we saw and relationships we built and maintained.
What is your favorite PoH album?  Song?  Why?
JD: I think my favorite album is Abracadaver and my favorite song is probably “I hope when you wake up…”
JS: I think Mt. Forever is my favorite. We spent a lot of time on it and I think it has the most interesting songs. Pretty sure no one was really doing anything like it at the time but who knows. I think it has the best “production” of all of them, which really isn’t saying much. We never really nailed it in the studio as far as I’m concerned.
What was your favorite show with PoH and why?
JS: I always really liked playing in Baton Rouge, LA. We played there in the back of a bar called the library with an amateur wrestling match. The next time we went back we played with an awful puppet show, they were using like rakes and bananas as puppets. The shows were always weird and pretty well attended. The only ones that stick out to me are the weird ones.
At your forthcoming shows will you be covering ground from a variety of releases or focusing on one record in particular?
JS: We’ll be playing songs from every record, more songs than we’ve played at past shows.
Will both of PoH’s drummers participate in these shows?
JS: Yeah, both will be playing their respective songs. They are completely different drummers, I feel like I’m just really noticing that now.
JD: Both drummers will be with us for the Akron show. Only Cory will be playing Cleveland.
Have you been practicing for these shows?  How have the practices felt?
JS: We’ve practiced with Jon (Finley) twice, Cory comes in a few days before the shows and we’ll probably run through his stuff a few times too. They’ve gone really well, I’m surprised by how easily the stuff comes back to us. It’s basically just like it was when we wrote them, it’s been fun. I can’t believe some of the songs though, I’ll never understand how a few of them were even written, especially stuff off the first record. Not sure what we were up to back then, everything is blazing fast and never repeats.
Are you proud of the niche that Party of Helicopters carved out during its tenure?
JS: Hmmmm, I’m not sure if we did. No one was really singing over slightly metallic noisy punk rock at the time but now everyone does. I doubt we have anything to do with that though. It would have been easier for us if they were all doing it back then
JD: I don’t really think about it like that. I feel fortunate for a lot of it, but I wouldn’t say proud.
Do you feel like PoH continues to influence bands now?
JS: No, not really. I’d be surprised if anyone younger than us really even knows who we are now. It feels like we were from a different time, one that isn’t being re-discovered yet. Maybe one day (laughter).
JD: Possibly? Sometimes I wonder to what degree it has influenced the music I’ve made since.
(Party of Helicopters perform October 23 at Thursday’s Lounge in Akron, Ohio, and October 24 at Happy Dog at Euclid Tavern in Cleveland, Ohio. Visit them here: https://www.facebook.com/The-Party-of-Helicopters-131804410203265/.)

Tags: Featured, The Party of Helicopters