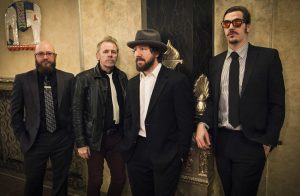 This February The Delta Routine will be releasing their fourth full-length album, You And Your Lion.  While this effort follows a similar path laid out on their last acclaimed album Cigarettes & Caffeine Nightmares – incorporating elements of garage, power-pop, punk and classic rock – the Milwaukee foursome also add a more rough-hewn Americana undertone to the mix.
The Delta Routine’s You And Your Lion was recorded at the Factory in Chicago and co-produced by band members Mike Hoffmann and Nick Amadeus.  It will be available February 17 in both CD and digital formats.
Today Ghettoblaster has the pleasure of premiering “Gone Again.” This is what frontman Nick Amadeus had to say about the cut:
“‘Gone Again’ is really about not living up to someone else’s idea of you. You gotta keep it moving and try again in the next place… you can’t give up.”