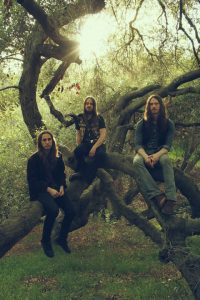 Today Ghettoblaster offers the exclusive song premiere of Radio Moscow’s “These Days”. This lysergically-laced heavy track is from the trio’s forthcoming album Magical Dirt (out June 17 via Alive Naturalsound Records). This is the band’s fourth studio album for Alive (their first being produced by The Black Keys’ Dan Auerbach).
Parker Griggs had this to say, from an undisclosed location, about the song:
“‘These Days’ kinda has a loose meaning and can be taken in many ways.  But I think overall it’s about how we all think we need something or someone else to find happiness from, but in the long run you have to look inside yourself for this and can’t expect others to bring it all to you, because in the end you just have yourself.”