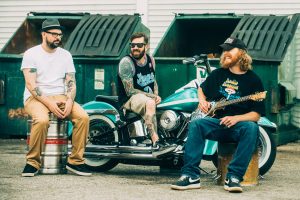 After nearly a decade of delivering their own high-octane, scuzzed-up take on North Mississippi rural blues as a duo, Left Lane Cruiser have recently expanded into a threesome for their latest studio album, Dirty Spliff Blues (their fifth for Alive Naturalsound Records).
Led by founding member Freddy J IV (aka Joe Evans) on vocals and slide guitar, and now joined by Joe Bent on bass and skateboard slide guitar (yes, he uses his skateboard as an instrument) and Pete Dio on drums and assorted other junk, this three-headed hydra, birthed in either Fort Wayne, Indiana or Hades depending on who you ask, still whips up the same frenzied mess of trashed-out punk/blues that LLC is known for.
Along with their music being featured in the hit television series Breaking Bad and receiving critical acclaim across the globe, Left Lane Cruiser have also toured relentlessly over the years, sharing the stage with artists such as Robert Belfour, Black Diamond Heavies, Hillstomp and Chris Cotton among others, and are also regular performers at the Deep Blues Festival now held annually in the cradle of the blues, Clarksdale, MS.
Left Lane Cruiser’s Dirty Spliff Blues will be released on limited vinyl, CD and digital formats on June 16 via Alive Naturalsound Records. Tour dates to be announced soon!
Today, Ghettoblaster is pleased to share the exclusive song premiere for Left Lane Cruiser’s new track “Whitebread n’ Beans.” This is what Freddy J IV had to say about it:
“The song’s name came from my drummer Pete Dio. It’s in reference to, as Pete puts it, a Mexican and a hillbilly had a baby. The birth of Pete’s daughter took place the morning we cut this track. The song lyrics are about the rebirth of the new Left Lane Cruiser. Rising up from the ashes of a dynamic duo, the power trio spreads its wings.”