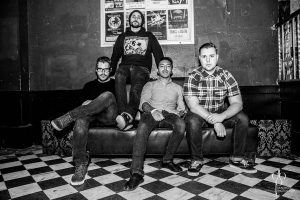 Franchise is a four-piece alternative post-hardcore band from New Jersey. Its members–  singer Kenny Ramierez, guitarist Edgar Martinez, bassist Mark Costa, and drummer Corrado Rizzi– bring their diverse influences and talents together to create something genuine, driving, and powerful. After one session in a hot, dingy rehearsal room in the New Jersey suburbs, Franchise hit the ground running and hasn’t looked back since.
Franchise entered Tree House Studios in the Summer of 2013 to record their debut self-titled album with producer, Frank Marra who has worked with artists such as The Gaslight Anthem and Ghost Thrower. The debut LP was released in September of 2013. The band has been building a fan base regionally in support of the album, playing shows relentlessly.
After the amicable departure of original Franchise vocalist, Tony Cincotta in May 2014, singer Kenny Ramirez joined the band. Formerly the singer of well-known and loved New Jersey acts such as The Murder and the Harlot and Lady Radiator, Ramirez brought a much more diverse, melodic element to Franchise that opened much more progressive, sonically experimental doors for the band. Shortly after bringing on Ramirez, Franchise went back to Treehouse Sound to record and film what would come to be The Mobile Tour, which was released in July 2014.
The band recently entered Cannon Found Soundation Recording Studios in March 2015 to record their sophomore release titled, Santa Muerte, with producer, Jesse Cannon. Santa Muerte is slated to be released on June 9.
Today Ghettoblaster has the pleasure of sharing “Counting Backwords.” This is what Ramirez had to say about it:
“The song is about self reflection and distinguishing the wrongs that were made in the past and now seeing that a change is needed in order to make right with the decisions that have led one’s self to either self destruction or self doubt. Understanding what it takes to own up to the bad decisions that were made and now taking the right steps to make a better person of one’s self.”