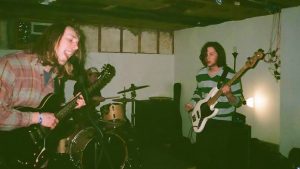 Milwaukee garage-punks, Filter Free Rodeo have been playing sexy-hard-ball with their fans since their introduction in 2011.  The band has fallen into an interesting promotional tactic over the past few years, releasing material resulting in a tour, just to disappear time and time again.  Welp, they have done it again!
This time coming from the shadows to release a brand new slammer of a single titled “Little Lord,” released digitally by Tasty Tapes on June 12.  The band is currently out on their Midwest dates with scuzzy rockers, The Rashita Joneses, in support of the single.
The new tune is a five minute exploration of a classic unsolved murder that is still being investigated in Waukesha, WI (long-time home for the band).  The victim, dubbed “Little Lord Fauntleroy” was discovered 1921 in a flooded quarry. His estimated age was 5-7 years and was described as being well dressed, in good quality clothing. Some sources report he was missing a single tooth from his lower right jaw and that he had been struck in the head before being thrown into the water. Other sources report he had been strangled.  The body was to deteriorated to be certain of any identity.  However, the police report addressed multiple sightings of a woman in black, wearing a heavy veil who would occasionally place flowers on the boy’s grave not too long after the discovery.  This pending case is one of the longest unsolved murders in the US and it has shaken the tiny Milwaukee suburb every since.   Filter Free Rodeo feeds off this story to create one of their darkest numbers yet, again proving that they have aren’t afraid of being tied down to a genre even after years of honing their sound.
The song was self recorded by frontman, Phil Hoge in the band’s home and local house venue, The Piss Palace.  If these young punks are proving anything through their music, it’s that DIY isn’t dead.  And, your mom goes to college.
Ghettoblaster has the pleasure of premiering the track today, which you can enjoy below: