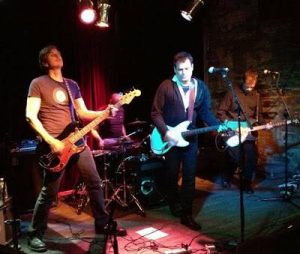 Washington D.C.’s Dot Dash, a band that features ex-members of Julie Ocean, The Saturday People (Slumberland label), Swervedriver (Creation), and Youth Brigade (Dischord) are set to release their third album in less than two years.
The 10-track Half-Remembered Dream, out this month, was preceded by Winter Garden Light (released in September 2012) and spark>flame>ember>ash (released in September 2011) – all on The Beautiful Music, the Ottawa, Canada-based indie label that has been issuing underground pop records for more than 10 years.
As before, there’s a persistent thread of melancholy running through Dot Dash’s ringing, intense, melodic pop, but it takes on a variety of forms. Amidst jangling, wistful guitars — contrasted by often thunderous bass and drums — Half-Remembered Dream is, by turns, energetic, plaintive, and punky.
To celebrate, the band has given Ghettoblaster the link to an MP3 download of “Bloom/Delay” to share.  Enjoy: