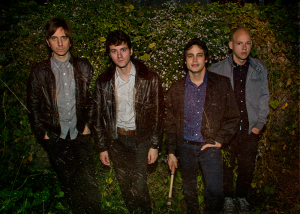 New York City ethereal rock quartet The Dig have announced extensive U.S. headlining tour dates beginning in September and running late into November. They’re certainly no strangers to the road, having recently toured supporting Portugal the Man, the Walkmen, the Antlers, the Lumineers, the Joy Formidable and others. But this lengthy headlining trek allows the band to further showcase their growing catalog of releases.
The Dig‘s recent release You & I was recorded with Greg Giorgio at the fabled Tarquin Studios in Bridgeport, CT. Consequence of Sound premiered the title track HERE. Stream/share the full album HERE.
You & I is available on CD and download as of October 22, 2013 via Buffalo Jump Records.
Ghettoblaster recently caught up with the band to talk about their forthcoming tour travels. This is what they told us.
What kind of vehicle are you traveling in, and what are you doing to outfit it for maximum comfort?
We’re traveling in a 1998 Ford Club Wagon, a pretty classic tour van.  It’s in a nice metallic baby blue color.  As far as comfort goes, we’ll be taking out some extra rows of seats, putting a trailer on the back, and hopefully keeping her clean for as long as we can.
What is the planned playlist for your travels?
We usually don’t plan out a playlist or anything, but there will always be some Creedence, Motown, country radio stations and all that stuff.  We’ve also been listening to a compilation of songs about cockroaches.  Particularly a track on there by a singer called “Mrs.  Miller.”
Which of the cities that you’ll be visiting are you most excited about and why?
With this tour we’re pretty psyched about all of the cities we’re gonna be going to, but if we had to pick a few, L.A, Chicago, and San Antonio are always a great time.
Which of your destinations are you most anxious about?
We’re not anxious about the destination with this one particular show but the journey up to the venue can be a little rough.  We’re doing a show at a great place in Yosemite called Evergreen Lodge, and there’s a long drive up a very steep and mountain.  We’re hoping that the van will be able to handle it.  Fingers crossed!
What are the top three essential, must-have items that you take on the road with you?
Money, tires, and the third one is a tie between vitamins, cigarettes, and a drivers license.
What will you miss most about home while you are away?
Mark’s kitty.
Do you keep a diary during your travels? If so, is it public? Can we share it?
Pretty sure someone in the band must be keeping one, but it’s been kept a secret so far.  As soon as we find it we’ll be sure to make it public and share away.
What is the crazy thing you’ve seen on the road during this or other tours?
This is a tough one.  There’s one that comes to mind although it’s probably not the craziest.  We were playing an outdoor daytime show for a crowd that was watching some Sunday football.  A guy sitting by the stage made an air shotgun with his hands and pointed it up to the sky as if he was pretending to shoot a bird, and then lowered it down to the stage and aimed it at us.  A few songs later though he was dancing with his girlfriend by the stage, so it was tough to get a read on whether he liked it or not.
(Catch the band live here:
09/04 – Indianapolis, Indiana @ White Rabbit: http://bit.ly/VYkMmd
09/05 – Chicago, IL @ Schuba’s – Tickets http://bit.ly/1oFf1TS
09/06 – Madison, WI @ Memorial Union Terrace – Free Show
09/07 – Minneapolis, MN @ 7th Street Entry – Tickets http://bit.ly/1moTTBD 09/11 – Denver, CO @ Hi Dive – Tickets http://ticketf.ly/1kEOYrQ 09/12 – Greely, CO @ Moxi Theater – Tickets http://tktwb.tw/1y4XFUB
09/13 – Salt Lake City @ Shred Shed – Tickets http://bit.ly/1zuk0N0
09/16 – Portland, OR @ Bunk Bar – Tickets http://bit.ly/1qKwDiK
09/17 – Yosemite, California @ Evergreen Lodge – Free Show
09/18 – San Francisco, CA @ Brick and Mortar – Tickets http://bit.ly/1kMeQ5c
09/19 – Los Angeles, CA @ the Satellite – Tickets http://ticketf.ly/1rO0AQV
09/20 – Phoenix, AZ @ Yucca Tap Room – Tickets http://bit.ly/U1Lysf
09/22 – San Diego, CA @ Soda Bar – Tickets http://bit.ly/TQQdgp
09/25 – Austin, TX @ Mohawk – Tickets http://bit.ly/1ohyyXo
09/26 – San Antonio, TX @ Hi-Tones – Door tickets only
10/01 – Atlanta, GA @ Drunken Unicorn – Tickets http://bit.ly/1rjXOAp
10/02 – Nashville, TN @ the Basement – Tickets http://bit.ly/1qX07dB
10/03 – St.  Louis, MO @ The Demo – Tickets http://ticketf.ly/1rOhrTv
10/04 – Milwaukee, WI @ Stonefly Brewery – Tickets http://bit.ly/W27FQQ
10/09 – New York, NY @ Baby’s All Right – Tickets http://ticketf.ly/1oRYBaL
10/10 – Burlington, VT @ Artsriot – Tickets http://ticketf.ly/1s4HLsE
10/11 – Boston, MA @ Great Scott  – Tickets http://bit.ly/1wjP4L1
11/08 – Cincinnati, OH @ Southgate House Revival Room – Tickets http://bit.ly/1zAcArt
11/14 – Tampa, FL @ New World Brewery – Tickets http://bit.ly/1nbOhLn
11/15 – Orlando, FL @ WIll’s Pub – Tickets http://bit.ly/WbA2wb)