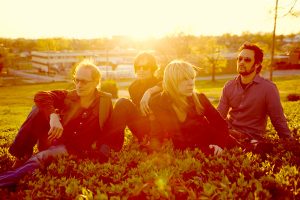 In Ghettoblaster issue 31 we had the opportunity to catch up with Austin’s Heartless Bastards before the release of their fourth LP, Arrow, on new label home Partisan Records.  Now the blues rock quartet are out supporting the record during a Summer tour.  Frontwoman Erika Wennerstrom took a few minutes to give us a peak behind the curtain of their current trek and travels.  Here is what she said…
What kind of vehicle are you travelling in, and what are you doing to outfit it for maximum comfort?

We took a bus out on the East and West Coast, but we are doing a lot of smaller cities right now and are taking the van. It’s a Ford 15 passenger with a trailer. I think just keeping it clean makes a pretty big difference with comfort. I’ve seen some bands with pretty gnarly vans.
What is the setlist for your tour?
We switch it up a bit every night. We always play songs from all four albums. Our focus is heavy on the new album though.
How about a playlist for your travels?
We listen to NPR on satellite a lot, and the guys listen to baseball and football quite a bit. I usually tune out on the sports and read or something. Some albums we have played recently are the new Dr. John record, an old Graham Nash solo album , and the most recent Blitzen Trapper.

Which of the cities that you’ll be visiting are you most excited about and why?
Pioneertown, CA. It’s in the Joshua Tree desert. It will be our first time there. It’s has an interesting musical history. I’m a huge fan of Gram Parsons.

Which of your destinations are you most anxious about?
None.

What are the top three essential, must-have items that you take on the road with you?
Toothpaste, deodorant, and a good book.

What will you miss most about home while you are away?
Sleeping in my own bed.

Do you keep a diary during your travels?  If so, is it public?  Can we share it?
No.