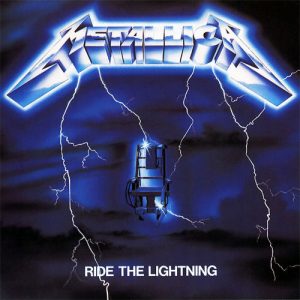 Emerging glitch-rock trio HavocNdeeD’s new EP, Distoria, which dropped on July 10, showcases a band the combine indie rock and EDM in ways that only masters of dubstep, atmospheric and glitch rock influences can intuit.  It’s no surprise that these dudes have collaborated on numerous official remixes, including for Linkin Park and She Wants Revenge.  We recently caught up with HavocNdeeD’s Las Vegas resident OB-one (the remainder of the trio consists of J. Paul of Phoenix and Skaught Parry of Salt Lake City) and were pleasantly surprised that his favorite album was pulled from bins in the “metal” section.  Here’s what he told Ghettoblaster about Metallica’s Ride The Lightning…
What is your favorite album?
I have a few but I would say Metallica’s Ride the Lightning is at the top of the list
Do you remember when you received or purchased the album?
Vividly…It was one of the cassettes I picked up on my weekly music store run when I was like 9 or 10. I still have it actually..
What is your favorite song on the album?
“Fade To Black.”
What is it about the song that resonates with you?
I don’t know, just something about it…the vibe, the lyrics…everything about it seemed to speak to me.
Have you ever covered/remixed a song from the album?
We haven’t but it’s definitely crossed my mind many, many times and will probably happen sometime in the future.
What is it about the album that makes it stand out against the band’s other output?
I would say that it’s still aggressive like Kill ‘Em All, but more refined I guess. I remember the cover art being so killer to me when I was younger too. So many aspects of it that I enjoy, but it’s hard to describe…a lot of it is the memories surrounding that time.
Have you ever given a copy of this record to anyone?  What were the circumstances?
No need to cause most my friends had it already.  And if they don’t have it by now, too bad.  They’re sleeping!  Ha ha!
Which of the records that you’ve performed on is your favorite?
I would have to say it’s probably our newest release, Distoria.
What is your favorite song on the album and why?
Obviously I like them all but if I had to pick I think I would say it’s a tie between “Vision” and “Waiting Game.”  I really love the whole vibe of “Vision” and the energy of “Waiting Game,” especially the chorus where Skaught screams.
(The band is currently streaming their new EP in its entirety on their Soundcloud page.  Check it out here: http://soundcloud.com/havocndeedsound/sets/distoria-ep/.)