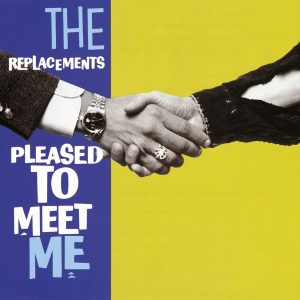 Pleased To Meet Me

As a veteran of the respected punk scene of Chicago, Illinois, Mike Felumlee knows how to turn a three minute pop structure into something more than the sum of its parts. Perhaps best known for his seven year stint drumming for The Smoking Popes from 1991-1998, Mike also drummed for Alkaline Trio between 2000 and 2001, playing on their critically acclaimed, breakthrough album, From Here To Infirmary.
Mike launched his solo career soon afterwards, with his debut LP, 2001’s 64 Hours. This was swiftly followed by a fan-favorite split EP with Alkaline Trio bandmate Dan Andriano in 2002, which saw a vinyl re-release in 2012.
After spells with Duvall and This Is Me Smiling, Mike took an extended break from music to spend more time with his family, having spent over a decade as a working drummer. Changes to his personal circumstances led him to return to music in 2008, performing only a handful of times over the subsequent years, but playing and writing every day.
Mike reports to have written over 80 songs in the past five years, and while he remains modest in his aspirations, he’s also confident in the quality of his material, and is keen to share it with listeners old and new. With that aim in mind, he’ll be putting out an EP, and subsequent full length, through Stay Posi Records later in 2013.
Ghettoblaster recently caught up with Felumlee to discuss another band that knows pop song structure – The Replacements.  This is what he had to say about Pleased To Meet Me…
What is your favorite album?
I have many favorite albums so it’s hard to pick just one. Let’s go with Pleased To Meet Me by The Replacements for now.
Do you remember when you received or purchased the album?
I remember being in sixth or seventh grade and seeing an ad for the record in Thrasher Magazine. I thought the cover and the band name were cool so I saved up a few bucks and went to the record store to pick it up on cassette.
What is your favorite song on the album?
That’s a tough call. I’d say “Alex Chilton” or “Skyway.”
What is it about the song that resonates with you?
“Alex Chilton” is one of the songs that inspired me to play rock music. I’m not exactly sure why. The melody and groove are just so awesome that it makes me think “I want to do this!”. I think “Skyway” is just an amazing ballad. The vocal performance is very soulful. I’m feeling melancholy just thinking about that one.
Have you ever covered a song from the album?
Never. I can’t do any of those songs any justice. They are perfect as they are.
What is it about the album that makes it stand out against the band’s other output?
I think the Replacements had a few albums that were just as good. Pleased to Meet Me just happened to be the first one I bought. I think Let It Be, Tim and Don’t Tell A Soul are probably all just as good but Pleased to Meet Me means the most to me personally.
Have you ever given a copy of this record to anyone?
I’ve never given a copy to anyone, but I’ve used several songs from it on mixtapes (yes actual cassette mixtapes).
What were the circumstances?
I made tons of mixtapes for friends and girlfriends in high school. I doubt I ever made one that didn’t have a song from this record on it.
Which of the records that you’ve performed on is your favorite?
I’m pretty proud of most of the records I’ve played on (excluding some early Smoking Popes stuff when I didn’t understand that a song should be the same tempo from start to finish). I think my favorite though is the self-titled album by This is Me Smiling. It was definitely the most challenging! The songs all have so many parts and different time signatures that I had to really practice hard and study them. The record came out in 2005 and I still really enjoy listening to those songs.
What is your favorite song on the album and why?
“Prettier” is my favorite song on the record. The drum beat to that song is probably the most fun beat to play out of any of the songs I’ve played on. I also love the vocal melody, and bass line. It’s just a fun song to play and listen to.