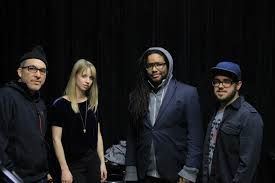 Dreams in Static conjures up the aesthetics of Pulp Fiction and Curtis Mayfield, resurrecting the bluesy guitar and soul-singing that pops in a world where popular music has been left in a state of static.
With hints of Smokey Robinson and TV on the Radio, “You’re On Your Own” (http://bit.ly/1c5f351) is the first single from Dreams In Static, a project produced by LA based hip hop producer Diwon and multifaceted guitarist/composer Dugans, featuring the vocals of singer/composer Akie Bermiss.
This was enough to capture Ghettoblaster’s attention.  We recently caught up with the guys to discuss their favorite ablums, of which there were many…
What is your favorite album?
Diwon: That’s tough it is probably a tie between Beastie Boys – Paul’s Boutique and John Coltrane – A Love Supreme.
Akie Bermiss: D’angelo, Voodoo.
Dugans: Physical Graffiti by Led Zeppelin.
Do you remember when you received or purchased the album?
Diwon: No idea.  The first album I remember buying was Motley Crue – Girl Girls Girls when I was living in Italy at seven years old.
Akie Bermiss: My older brother mailed it to me during my freshman year at college.
Dugans: Probably high school.  I remember liking it a lot then, but it was not my favorite.  I didn’t fully get the depth of it until years later when I began to write my own music.
What is your favorite song on the album?
Diwon: “Resolution” at :21 seconds it just hits so intensely.  It’s one of the most beautiful moments and “Hey Ladies” because it’s just such a great lo0-fi beat and captures the Beastie vibe with their humor and flyness.
Akie Bermiss: Probably “The Root”.
Dugans: “Wanton Song”.
What is it about the song that resonates with you?
Diwon: The songs have so much life in them.
Akie Bermiss: It combines old school sensibility and harmony (like classic soul) with hip hop and modern soul elements. and it tells a love story in a creative, almost metaphorical way.
Dugans: The musicianship, song-writing and especially the drums.  it still sounds fresh today four decades later.
Have you ever covered a song from the album?
Diwon: No.
Akie Bermiss: I have yet to do that.
Dugans: No.
What is it about the album that makes it stand out against the band’s other output?
Diwon: I think both of those albums are them at their best, in a zen type space where they were just on their highest levels.
Akie Bermiss: It was not only the album (which was D’angelo’s second) as it stood against his previous record, but also the way in which it changed the landscape of soul music. it was at once throwback and also so far-seeing. the use of live instruments tweaked to give it a programmed sensibility. And then the clusters of vocal harmony.  No one was really taking that kind of sound so far into the core of the music.
Dugans: I think it was a real turning point for them as a group.  They reached their potential.  I’d say it’s their Sgt. Pepper.
Have you ever given a copy of this record to anyone?  What were the circumstances?
Diwon: Probably a lot of times, I just don’t recall.
Akie Bermiss: I give to anyone who hasn’t heard it.  Friends, girlfriends, students.  Strangers…
Dugans: No.  Everyone already owns it.
Which of the records that you’ve performed on is your favorite?
Diwon: “You’re On Your Own”  was very cool because when we laid it down it was full of guitars and rock drums and then on the way home to LA, I slowed down the tempo switched out the drums and laid in a boom bap type beat, kept just Dugan’s Bassline and Akie’s vocals. Dugans took that and laid down the coolest minimal guitar track and it’s a totally different vibe.  It was really cool to see something transform in that way of dissecting the parts and building it back as it was always meant to be.
Dugans: The current Dreams In Static record.  It’s the most interesting yet. It has so many different elements coming from three very diverse song-writers.  The result is authenticity for the purists and an accidental swag for the skeptics.
What is your favorite song on the album and why?
Diwon: We haven’t finished our full album yet, but right now my favorite track is called “Part of the Machine,” which will most likely be our next single and music video. It’s got a really interesting vibe, very upbeat…it sounds like it would fit the ‘Superfly’ soundtrack, just more 2014…
Akie Bermiss: “Part of The Machine”, which is the next Dreams In Static single coming out.  It’s got a little bit of everything in all the right measurements. There is rock, soul, funk, some killing drums.  And it tells a story.
Dugans: “Part of the Machine.” This was the first song I attempted to play bass on.  It was a lot of fun to record.
(For more information, check out http://dreamsinstatic.com/!)