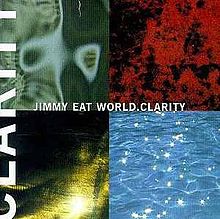 The story of a promising young pop punk band struggling to find an audience for their insanely catchy debut LP is a tale as old as time.  The story of Save Your Breath doesn’t diverge much from that model.  So why should one care?  Because their pogo-worthy, energetic tunes are aggressive, radio-ready, and actually worth hearing.
Welsh pop punks Save Your Breath will road test the material during their fall UK tour (dates below) supporting The Story So Far and Seahaven, with a headline album release show in Cardiff on October 7 for their LP, There Used To Be A Place For Us (Pre-orders for There Used to Be a Place For Us are now available at: https://store.nosleeprecords.com/artist/save-your-breath).
Ghettoblaster caught up with guitarist Dave Harries before the album release and tour to talk about one of his favorite records, Jimmy Eat World’s Clarity.  This is what he said about it.
What is your favorite album?
Clarity, by Jimmy Eat World.
Do you remember when you received or purchased the album?
It’s a long time ago, but I remember hearing ‘Lucky Denver Mint’ on a compilation CD that came with a music magazine. As soon as I heard that track, I was blown away. I played it on repeat, nonstop, and then bought a copy of the album as soon as I could get hold of one. I’ve loved the band ever since.
What is your favorite song on the album?
Tricky question as there’s so many I love, but I’ve got to say ‘Just watch the fireworks’.
What is it about the song that resonates with you?
I know that everyone takes a slightly different meaning from songs, which is natural, so I guess for me, this song just really strikes home with a specific time and place that I was in, a few years ago. I actually have this song title tattooed on myself.
Have you ever covered a song from the album?
Yeah, I’ve covered a few of them. In the city I live in, twice a year there’s a charity show in a great little venue, and you pick a band and do a few songs by them for fun, and it’s for a good cause. It’s like stars in their eyes, but with bands. Off this album, me and some friends covered ‘Blister’, and ‘Lucky Denver mint’ as well as a variety of others, off other albums.
What is it about the album that makes it stand out against the band’s other output?
I really love Bleed American, and Futures, and some of my favorite Jimmy Eat World songs are on those albums too, as well as the Jebediah split, but I just love the whole overall sound of this record, I love the experimentation that went into making the songs, and all the little nuances of this particular record. I’d have loved to be a fly on the wall during the recording process.
Have you ever given a copy of this record to anyone?  What were the circumstances?
I’ve definitely given a copy to my girlfriend, in the hopes that she would fall in love with the record, but it didn’t really work out the way I’d hoped. Heh.
Which of the records that you’ve performed on is your favorite?
I guess that would be the latest album we’ve done – There Used To Be A Place For Us. The first EP I recorded with the band was great fun, and turned out really well, but I think we were generally more focused on this one, and really found a sound that clicked with all of us. This record feels so rewarding when I listen back and realize what we’ve accomplished.
What is your favorite song on the album and why?
It’s a song called “Airs & Graces”. It’s the fastest, most hectic song on the record in my eyes. It’s just incredible fun to play, and I’m really happy with how it came out. It’s got my favorite middle 8 of any song on the whole record too. If you don’t automatically headbang to it, your necks not working.
(Animal Style Records has launched a name your own price / free download of a new track titled “Lessons”, off Save Your Breath’s upcoming LP, There Used to Be a Place For Us, out October 8. To download/stream the track and check out a lyric video for the track:
Download “Lessons” at http://animalstylerecords.bandcamp.com/track/lessons
“Lessons” lyric video https://www.youtube.com/watch?v=pZQCiEm3lPA
Tour Dates:
October 7th –  CARDIFF  Clwb Ifor Bach (Album release headline show. *Tickets on sale Tuesday, July 23 at 9am)
(Below with The Story So Far and Seahaven)
08 – SOUTHAMPTON Roxx
09 – KINGSTON Mccluskys
10 – LONDON Underworld
11 – NOTTINGHAM Rescue Rooms
12 – SHEFFIELD Corporation
14 – GLASGOW Garage
15 – LEEDS Cockpit
16 – MANCHESTER NQ Live
17 – BRISTOL Fleece
18 – BELFAST Auntie Annies
19 – DUBLIN Fibber Magees)