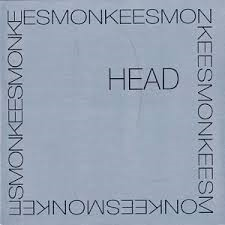 Dayton, Ohio mind warpers Cricketbows contacted Ghettoblaster last week to announce that they’ve released two brand new songs for free via Captain SIB (Scotland) and Power Popaholic (USA).  While we were chatting we asked frontman Chad Wells about his favorite record.  On this particular day it was The Monkees HEAD.  This is what he said about it.
What is your favorite album?
That is a terrifically hard question to answer!! I might give a different answer everyday of the week – I know two of my common answers are The Beatles White Album and Zeppelin’s Physical Graffiti – they’ve both been there for me since childhood – never tire of either and they’re both so stacked with different musical genres and vibes that you get a real goulash of sounds while still maintaining each band’s signature sound. But that’s not how I feel today. Today I feel like a little HEAD… One of the vastly underrated albums of the 1960’s it was The Monkees swan song, their career suicide and the soundtrack to the Jack Nicholson directed mindfuck that was their super cult like, major motion picture.
Do you remember when you received or purchased the album?
My mom was a massive Monkees fan and owned the album. It’s cover is very simple – It’s a silver mirror that when you hold it in front of your face shows you a trippy, wiggly, reflection of your own head so it really struck me as something different and special. I think I remember first listening to it when I was maybe 3 years old and it blew my mind even then. It contains some of the greatest pop psychedelic songs ever written and weird samples and sound effects from the film.
What is your favorite song on the album?
Another terribly hard question to answer. Every song on the album could be my favorite on any given day but I have to say that I think it is the Micky Dolenz voiced psychedelic, cinematic, epic song “The Porpoise Song” written by Carole King.
What is it about the song that resonates with you?
It’s otherworldly and beautiful. Mick’s voice is very feminine and soft on the track and the whole song has a quality that makes you feel like you’re flying. I feel all at once safe, warm, sad and happy when I hear it.
Have you ever covered a song from the album?
Cricketbows cover “Porpoise Song” and I used to try to play “Circle Sky” in my high school band, C.O.H.
What is it about the album that makes it stand out against the band’s other output?
It’s unlike anything from that time and it stands up as a single piece of work. Their other records were generally collections of singles. After their first two albums, which were produced, written and recorded with very little input from the guys, they wrestled creative control away from the record company and TV producers and they created the excellent album Headquarters, which stands up nicely on its own and gives us a bit of foreshadowing on what would come a couple years later with HEAD.  But then they slipped back into writing and recording singles oriented albums. HEAD is a masterpiece on the level of Sgt. Peppers and Pet Sounds.
Have you ever given a copy of this record to anyone? What were the circumstances?
I have never gifted that record to anyone – however I took my wife’s copy along when she and I met Micky Dolenz and had it signed for her. The Monkees were something that drew us to each other and cemented our love for one another – about 25 years ago and I tattooed a guy who worked as a sound and lighting engineer at a casino where Micky was performing. I had gifted him a special tattoo to remember his mother and he gifted me VIP backstage passes and front row seats for Micky’s show!
Which of the records that you’ve performed on is your favorite?
I’m really proud of the work I’ve done in all the bands I’ve been involved in – whether producing or performing but I’d have to say my favorite recorded work is the last Cricketbows record LID and the cover of that record is a nod to The Monkees HEAD cover actually. I really felt like my songwriting hit a peak with that one and I was fortunate to be able to have one of my favorite singer/songwriter/guitar players, Andy Gabbard of Buffalo Killers, play and sing a bit on that album.
What is your favorite song on the album and why?
“A Song For the Raggedy Hillside”. I think I’m most proud of that one because it was a giant step outside of my comfort zone and was very personal and autobiographical… AND I used strings on it!
(Get the new single from Cricketbows for free here:
All The Way Down b/w Raised On Rock And Roll Digital 7″, by Cricketbows
powerpopaholicproductions.bandcamp.com)