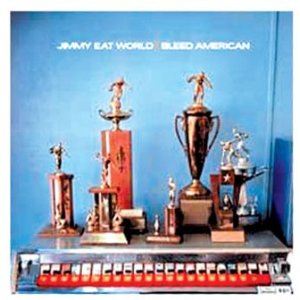 Now, Now, Minneapolis trio, who has captured the attention of NPR’s All Songs Considered and The Onion with their inviting, angular and seductive sound, are heading out on a run of fall tour dates with Motion City Soundtrack and Jukebox The Ghost supporting their sophomore album, Threads.  Not to be overlooked, Threads was released in March via Chris Walla’s Trans Record Label, an imprint of Atlantic, and a jump from previous label No Sleep   With a growing fanbase, and support tour slots with Fun. and The Naked and Famous under their belts, Threads showcases the band’s perfect brand of pop, inspiring unfailing support and singalongs from old and new fans alike.
Ghettoblaster recently caught up with Now, Now vocalist/guitarist/keyboardist Cacie Dalager to talk about another perfect pop album, Jimmy Eat World’s Bleed American.  Here is what she told us about it…

What is your favorite album?
Bleed American by Jimmy Eat World
Do you remember when you received or purchased the album?
When I was fourteen I was lucky enough to see them at Warped Tour in Virginia Beach. I had never heard of them before. They were the first band we saw of the day and there were only a few people watching. Everyone I was with (including my dad) bought their album after their set.
What is your favorite song on the album?
“Bleed American” or “Cautioners.”
What is it about the song that resonates with you?
“Bleed American” is so hard hitting and catchy. And “Cautioners” feels like you got punched in the stomach in the best way possible.
Have you ever covered a song from the album?
I was in a friend’s band for one show and we covered “Bleed American.”  And one of the first songs I learned how to play on guitar was “My Sundown”.
What is it about the album that makes it stand out against the band’s other output?
Everything about that album is so genuine. It is super catchy, but not over polished. It was one of the first albums I appreciated as a whole and actually felt connected to.
Have you ever given a copy of this record to anyone?  What were the circumstances?
I am pretty sure I gave a copy of Bleed American and Clarity to Brad (Hale of Now, Now). I needed him to understand how good they were.
Which of the records that you’ve performed on is your favorite?
Threads or our first two EPs.
What is your favorite song on the album and why?
There is a three-way tie. “The Pull,” “Colony,” and “Magnet.” If I can choose a b side I would pick “Shifting.” Those are the songs that I feel most emotionally invested in. They are also they last songs written before going into the studio, so I think they are the closest to what I would currently prefer to write. “Magnet” is one of my favorite songs to play live as well.
(Stream/Download “Dead Oaks” – “School Friends” on SoundCloud.  Watch the video for the single “Thread” here: http://youtu.be/yfi_WUxfKP4.)