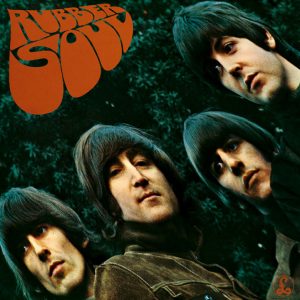 Canadian trio Young Rival plays streamlined garage pop (in the vein of classic British Invasion), keeping the sound fresh by incorporating the melodic twists listeners have come to expect from modern indie rock. Their new full-length Stay Young was just released via Sonic Unyon Records, along with their video for the song “Two Weeks” (link below). The video, done with face-paint artist James Kuhn, is one of the most uniquely striking and bizarre videos ever.
Young Rival already garnered the attention of music press taste makers — they were named a band to watch by outlets such as Stereogum and RCRD LBL.  They’ve also spent time on the road with likeminded indie game changers like Born Ruffians, The Sadies, and Tokyo Police Club.
Ghettoblaster recently caught up with Young Rival’s Aron D’Alesio to discuss one of his influences, a musical game-changer in its own right, The Beatles Rubber Soul.  Here is what he had to say about the classic record…
What is your favorite album?
Rubber Soul by The Beatles.
Do you remember when you received or purchased it?
I think I picked it up when I was in grade 10.
What is your favorite song on the album?
“In My Life.”
What is it about the song that resonates with you?
I like that lyrically it covers the ups and downs of life while putting into perspective what’s really important, or at least what’s really important to the author. The melody and song are undeniable.
Have you ever covered a song from it?
No.
What is it about the album that makes it stand out against the band’s other output?
I think Rubber Soul was where they began to experiment more and then took that to the next level on Revolver.
Have you ever given a copy of this record to anyone?  What were the circumstances?
Not really. I’ve definitely suggested people check that record out, but I’ve never made a tape of it to give to someone or anything like that.
Which of the records that you’ve performed on is your favorite?
The latest record [Stay Young] is my favorite.
What is your favorite song on the album and why?
I think “Nothing You Know Well” is my favorite song on the record. I like that it feels a bit different from anything we’ve done before. People have said it has elements of 60’s surf/garage/pop while somehow sounding completely modern. That to me is the perfect description as a lot of our sensibilities come from old models of songwriting yet we don’t live in the 60’s obviously, nor are we trying to sound like we are. We just value certain elements of songwriting that seemed to be more prevalent during that era.
(Watch the “Two Reasons” video here:
http://www.youtube.com/watch?v=-b8CwNHAx54&noredirect=1)