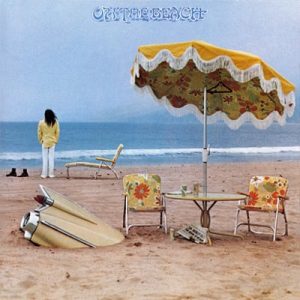 Fans of Dayton’s independent rock scene should are no stranger to power poppers King Elk, as the band’s primary songwriter, Andy Smith, did time in popular Gem City quintet Andrew & the Pretty Punchers.  Shortly before the Punchers hung up their hats in October 2010, Smith told Dayton City Paper, “No matter how hard I tried, I always kept writing rockers with this band.  It’s really weird because I’m a really sad guy, but I write these pop songs. I dunno, it’s time to be sad for real.”  Smith was only partially forthcoming on his future direction though.  While songs like “Ghost” and “The Navy Boat” from their June release, Making Buildings Out Of Everything, conjure comparisons to other sometimes downtrodden troubadours like Jeff Buckley and Ryan Adams, tracks like “Sea Swallows Sun” are sparkling, Beatles-influenced pop gems.
Ghettoblaster recently caught up with Smith to ask about his favorite record and to get a sneak peek at what he digs about one of his foremost influences.  Here is what he told us about Neil Young’s On The Beach…
What is your favorite album?
My favorite album of all time is On The Beach by Neil Young.
Do you remember when you received or purchased the album?
I borrowed it from my dad when I was like 16.
Have you ever given a copy of this record to anyone? What were the circumstances?
I have since gifted it to many ex-girlfriends leading me to re-buy it countless times.
What is your favorite song on the album?
“I need a crowd of people, but I can’t face them day to day.” the title track, “On The Beach” remains my favorite song, though, the whole album is flawless from start to finish.
What is it about the song that resonates with you?
It is a simply structured blues song at its core, but the bongos, lyrics and unbridled intensity with which it’s sung sprouts goosebumps up my arms every single time I hear it. “I went to the radio interview, but I ended up alone on the microphone.”  Every verse is better than the last (“get OUTTA TOWN!!”) and the song builds and builds and builds until it come to a wonderful ride-cymbal-switch psychedelic fade out. I haven’t even mentioned the guitar playing. It’s classic Neil: simple but fucking perfect. The subtle changes from the first solo to the second…just fucking perfect.
Have you ever covered a song from the album?
I have never covered a song from On The Beach. I’ve toyed with “For The Turnstiles”, and “Ambulance Blues”, but never played them for anyone. I typically find myself mimicking Neil’s screeching tone every time I sing one of his tunes. I can’t make it my own, because it is so clearly his.
What is it about the album that makes it stand out against the band’s other output?
Neil has some classic albums. After The Gold Rush, Harvest, Tonight’s The Night, Everybody Knows This Is Nowhere, but none are perfect start to finish. Every second of every song just kills me. The simple rhythm change halfway through “See The Sky About To Rain” or the eeriest, most badassed one-note guitar solo of all time on “Vampire Blues,” or the vioins/fiddles on the epic “Ambulance Blues”. It is the overall looseness/tightness that has never stops inspiring me and my songs. The songs are enthusiastic and feel very “this is our first time playing this,” but at the same time consciously constructed and performed almost flawlessly. The “flaws” becoming amazing “treats” for the repeat listener.
Which of the records that you’ve performed on is your favorite?

As far as album’s I’ve played on, it’s like many musicians I know: I like the most recent shit I’ve done the best (i.e. Making Buildings Out Of Everything).
What is your favorite song on the album and why?
“Mary (pts. 1 & 2)” is the song I’m most proud of. It is epic for me. Long, winding, and has that loose/tight feel that I crave. It is a very dramatic, drawn out song about a woman I dated that ended up falling in love with another woman. (“don’t believe in love, it’s not for men”). A silly thing to write/sing in such a serious manner, I suppose. Alas…