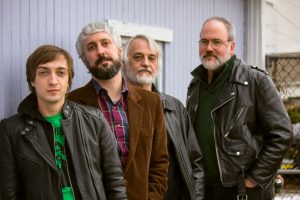 ’90s era indie rock and power pop is deeply embedded in the DNA of Dayton, Ohio’s Smug Brothers and for good reason.  Principal songwriter, vocalist and guitarist Kyle Melton spent the ’00s fronting unsung indie heroes Montgomery Greene, and some might recognize drummer Don Thrasher from such luminaries as Guided By Voices and Swearing At Motorists.  Additionally, both gentlemen have been the city’s predominant historians, telling the tales of rock greatness in Dayton Daily News, Dayton’s alt-weekly, and the Buddha Den music blog for well over a decade.
Teaming with guitarist Brian Baker (also of Brat Curse and Astro Fang) and newbee bassist Larry Evans (this is his first recording with the band) for their latest, Woodpecker Paradise, the quartet have clearly hit their stride.  Recorded with Motel Bed and former member Darryl Robbins, the band are set to release the album during a hometown show at Blind Bob’s on February 21, releasing the album via Thrasher’s Gas Daddy Go! label.
Today, Ghettoblaster has the pleasure of sharing the band’s video for “Meet A Changing World.”

We recently caught up with vocalist/guitarist Kyle Melton to discuss the song.
Was there a particular catalyst or experience that inspired the narrative for this song?
Not that I recall, but the lyrics  were written sometime? around 2002-2003. The title was only added in 2013, when the demo was included in a batch of about 40 songs I gave to the band called “The Solitary Hive.” There were a few more lines written at the end as well, which I cut later. I look at it as a way of reflecting on how life tends to get more complicated as you go on, that maybe you had fewer obstacles in the way when you were younger and things seemed simpler. Whether it is true or isn’t, things always change and you have to find a way to deal with that. That’s what I get out of it. But anyone can bend the narrative for their own needs and I’m fine with that.
What was the composition or writing process like for this song?  Did it change at all in the studio?
The original demo I recorded on my hand-held cassette recorder on an electric guitar and my little Marshall micro-amp, which is great for demoing, sometime in like 2004-2005. It had a decidedly heavier spin, pretty fast and punky. That’s the demo I gave to the guys, but when we went to work it up as a group – this was our first attempt with our current line-up to work up a song – it went a completely different direction. That is one thing I always enjoy, when my sketch turns out to be wrong for the group that learns it, so we roll with what the group comes up with. I’m always willing to admit my initial idea isn’t what the song requires. So, we played it that way all last year live, so when we went in to record with Robbins, we just knocked it out live the way we had been doing it in one take. Pretty painless.
Are there overarching themes or ideas you are hoping to communicate with the album?

?Not intentionally, really, as these songs have been around for up to 10 years. I think it’s the same kinds of things I’m always looking at: figuring out how to come to terms with this world, what might be beyond this world, maybe we could figure out better ways to do things, seeing the various beauties and beasts all around us in an interesting way. Sometimes just writing fiction and playing with imagery and the way words sound. Nothing specific. It’s completely open to interpretation and the listener can make it whatever they need it to be.
Who did the video and how do you believe it complements the song?

?We met John Keefer through Facebook channels over the past couple years and he does film shorts on his 51Deep site [51Deep.com]. We wanted a video for “Meet A Changing World” and I asked him if he would do it. We just kinda gave him carte blanche and this was his interpretation of what we did. I find there are some very haunting scenes and some interesting other-worldly passages that are pretty cool. It’s pretty tripped out and makes you think on some level, whatever your interpretation and resulting findings might be is fine with us. Smug Brothers are always open to interpretation.
(Visit Smug Brothers here: https://www.facebook.com/smugbros.)