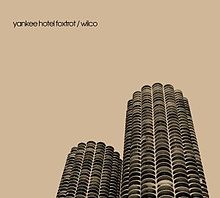 Pennsylvania singer-songwriter Andrew Shiraki, better known by his middle and stage name Koji, was once a staple of community house, hall and basement shows.  Following last Summer’s stint on the Warped Tour, The Fest in Gainesville, and a tour with Never Shout Never, Koji hit the studio to record his debut full-length LP.  Crooked In My Mind dropped April 30 via Run For Cover Records. With production help from Will Yip and appearances by friends in La Dispute, Balance and Composure, Title Fight, Gypsy and Lauryn’s Hill’s, showcases the mature, earnest, heart-on-sleeve rock fare that he’s become known for.
Ghettoblaser caught up with Shiraki to ask some questions about his favorite records.  This is what he told us about Wilco’s Yankee Hotel Foxtrot…
What is your favorite album?
Yankee Hotel Foxtrot, Repeater, Kind Of Blue, Illmatic, This Year’s Model,  Miseducation, It’s Hard to Find A Friend, Energy (OpIvy), Hearts of Oak, London Calling, Swing and Float… it depends on the weather. I can’t pick one, but I’ll go with Yankee Hotel Foxtrot by Wilco.
Do you remember when you received or purchased the album?
I bought it because it looked like it might be an emo or punk record. I had gotten into Texas Is The Reason, Pedro The Lion, Mineral, Jets to Brazil, and others. They all had a sound that had origins in punk rock, but were doing something that my musical (or visual) palate hadn’t experienced. So I took a chance on an album cover I liked, not knowing it would change my life.
What is your favorite song on the album?
All of them.
What is it about the song that resonates with you?
YHF is musical and human in a way that you do not hear very often. Wilco created a new world that I could get lost in it.
Have you ever covered a song from the album?
No, but one day I’ll be ready.
What is it about the album that makes it stand out against the band’s other output?
Yankee Hotel Foxtrot stands in real contrast with their previous albums at that point because of its rendering of textures and space, songwriting too. I think it’s where Jeff Tweedy started to hit his stride (the records that follow are amazing as well). I celebrate Wilco’s entire catalog, but this record is special to me because of the door it opened in my soul. Sonically, I had never heard anything like it. It really opened my mind to bands like Sonic Youth, The Flaming Lips, Spoon, and inspired me to revisit genres I’d abandoned from childhood like folk and country. I started to see how interconnected music was. Punk is not a cultural island, it’s a part of everything. YHF is a genre-bending masterpiece that asked me to go further into music.
Have you ever given a copy of this record to anyone? What were the circumstances?
All my friends in high school whether they wanted it or not.
Which of the records that you’ve performed on is your favorite?
The one I’m making is always my favorite, so the next LP.
What is your favorite song on the album and why?
I look at the album as a complete picture, so it’s difficult to pick a favorite corner or focus point. The dark element of the record makes me feel like my catalogue of songs is more human now. I think some people expected an incredibly positive, upbeat record. It’s important that people know that my optimism and positivity that I show on stage is ultimately grounded in challenge, suffering, real life experience.