At The Drive In has made good on its promise to release new music before the close of 2016. “Governed By Contagions,” from the band’s forthcoming full length album produced by ORL and Rich Costey, is the first new song written and recorded by At The Drive In since the 2000 release of its landmark third album Relationship Of Command. It is now available as a free download at atthedriveinmusic.com.

Following on the recent announcement of its upcoming Reading and Leeds Festival appearances, At The Drive In has confirmed a first handful of headline dates for 2017. The shows run March 20-29 and cover cities where the band was forced to cancel in June 2016 due to health concerns regarding Bixler-Zavala’s vocal cords.
At The Drive In is Cedric Bixler-Zavala, Omar Rodriguez-Lopez, Paul Hinojos, Tony Hajjar and Keeley Davis. (Founding member Jim Ward parted ways with the band on the eve of the band’s reunion tour.) 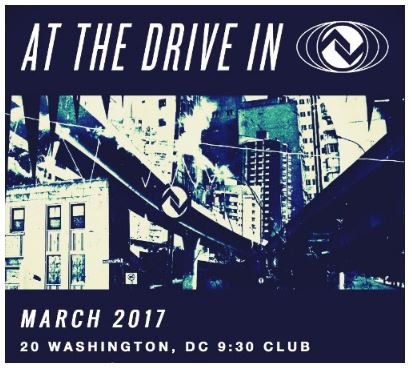 Tags: At The Drive-In, Rise Records