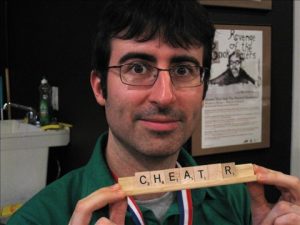 Yeah, this goofy son of a gun.

If Patton Oswalt set out to prove anything with his whole Comedians of Comedy project, it was that stand up comedy never died, and that there were good people telling funny jokes while expanding the scope of the audience comedy used to reach, and the scope in which comedy can be performed.
Continuing in that tradition, Comedy Central has for some insane reason given John Oliver an hour every Friday during prime time to showcase more of those good people. Four years ago, I’d never dream to see a standup show that featured John Oliver, Maria Bamford, Nick Kroll, Greg Fitzsimmons, and Eugene Mirman in a single episode. Alas, there they were.
It was far from perfect, but how is one to complain that their free pizza had onions on it? If you don’t like the onions, just pick them off. Oliver’s opening set featured some political jokes about America, similar to ones from his hour long special, and a bit of personal history. Things were kicked off with a few good laughs. Not sure if his performance was sub-standard to previous work to not outshine his guests, but his political wit was not quite as sharp as it has been in the past.
Maria Bamford killed it with a selection from her last album, (which, of course, I know front to back already), Nick Kroll came out as character Fabrice Fabrice and told terrible jokes with uncompromising personality tics in a loving way that was offensive to everybody. It’s nice to see that he can get past the fact that he was one of the Cavemen from that show about that commercial about Cavemen. Everyone needs money.
Greg Fitzsimmons stunned everybody by still being alive in 2010, and had some fantastic jokes and a few creakers that showed that, yes, he has been a bit behind in the public light in the last ten years, and yes, this may be a great way to jumpstart his career (again). His album, Fitz of Laughter, is still one of my golden favorites from that category of comedians who came up without that punk/indie rock edge, but still saw through the bullshit of the terrible comics of the 80s and 90s.
Mirman closed with a significantly longer set than everyone else, pulling great material from his God Is a Twelve Year Old Boy With Asperger’s album. And though I know that album front to back as well, Mirman riffs and rolls with the crowd with an extremely personal delivery that makes every joke new and exciting.
Hopefully the show makes the numbers that it should, and continues on season after season, and the main reason is that it’s one of the first instances of New Comedy getting a featured voice in a regular setting. Zack Galifianakis may be setting his roots as the new Will Ferrell, but playing dumb in The Hangover or Out Cold is far from his avant stand up comedy, which deconstructs the pure notion of what a joke is.
New Comedy isn’t quite that new — it’s easily categorized as a series of stories or personal tales that eschew traditional setup/punchline formations and has it’s roots in the early comedy of Lenny Bruce, Richard Pryor, George Carlin, and Bill Cosby. And somehow, everything was lost in the coked-out 80s and 90s, where comedy was billed as “Comedy,” and you wandered in off the street because you had nothing better to do. Try watching a Kevin Nealon stand up performance. As funny as it may be, you’re stuck watching a man deliver, in essence, a series of knock knock jokes. Set up, punchline, boom bam, done. The club has a brick wall, and the waitresses are trying to get you drunk. It was the era of schtick — sound effects, goofy ties, and rubberfaced deliveries. Even Bill Hicks fell prey to some of it. The best comics went into hibernation: Patton Oswalt, the king of the performance, spent years as a sidekick on a sitcom; the same fate happened to Brian Posehn.
So now the collective consciousness of Mainstream American Media Coverage of Pop Culture has acknowledged that these kids (read: 40 year olds) might have something good going on, and maybe it’s time to pay attention. Maybe it’ll last, maybe it won’t. But putting the spotlight back onto New Comedy is the equivalent of adopting a Tyrannosaurus Rex — not many people know what to do with it, and to some, it could be downright offensive, just by existing. The American public has just ruined Conan O’Brien, and he was the closest thing we had for years.
Gray Area Score: Goosefeathers