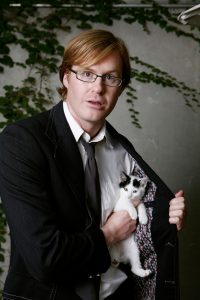 By Andy Fetter
Kurt Braunohler does what a lot of great comedians have done and still do: He points out the absurd situations that he comes into contact with. However, the material on his debut album How Do I Land? goes a bit beyond that, by in some cases actually creating those situations.
Even the title of the album itself has a connection. Earlier this year, Kurt started a Kickstarter campaign and raised enough money to pay a pilot to write “How Do I Land?” in the sky over downtown Los Angeles. The idea is, as he puts it, to “insert absurdity and stupidity into the world.”
I got the chance to speak with Kurt over the phone and he elaborated a bit on where he’s coming from.
“My goal is to point out weird things about the world, but I’m also really interested in culture-jamming. We live in a much more controlled world than I think people realize. So, I want to try to throw a wrench into it for no reason at all. It just keeps shit interesting.”
Kurt explains on the album that by doing this (and by encouraging other people to also create absurdity) he’s trying to make the world a better place. And according to him, some people have actually followed his lead.
“There’s one bit about taking greeting cards from drug stores and writing new endings in them. I had one guy actually tell me he had done that and shot a video of it.”
Additionally some of the material on this album gives some insight into Kurt’s own life. Just as a couple of examples, he gives the timeline between when he stopped breast-feeding and started smoking, and also recounts the story of an audition for Sacha Baron Cohen that went badly.
“This is basically a ’best of’ album with all the material that I’ve written since I started,” he explains. “I’ve already started working on new material and now that the record has been out for a few months, so I’m starting to rotate a lot of the older material out. A lot of the new stuff I’m working on is more personal stuff about me, similar to the Sacha Baron Cohen story and things like that.”
The worlds of comedy and music have been running closer together in recent years, with comedians and bands performing shows together and music labels like Sub Pop putting out comedy albums. So, a prominent indie-rock label like Kill Rock Stars releasing How Do I Land? seems almost natural.
According to Kurt, the process of working with them was pretty simple.
“My deal with Kill Rock Stars happened through Twitter. They retweeted one of my jokes, which was really awesome. I have a lot of respect for them as a label. So, I emailed them and asked if they’d want to put out a comedy album, and I think that same day I got an email back from them basically saying it was actually an idea they had been thinking about for a while.”
In addition to Kurt’s stand-up, he also hosts a multi-themed podcast called “The K Ohle.” It can range from discussions with Kurt and his guest about boats or pets (the theme changes each episode and it’s usually a random selection of which guest talks about which topic), or occasionally the theme will be “Get Lost.” These episodes involve Kurt blindfolding his guest and taking them somewhere to have them figure out where they are.
“The logistics of that theme in particular can be challenging” Kurt explains. “For one thing, it’s very time consuming. In addition to all the research that goes into where we’re going and the time it takes to record it and put it all together. Plus, of course, the guest has to trust me enough to blindfold them and not tell them where we’re going.”