Steven Griffin, aka Griffin Cosplay is a new cosplayer based out of Dayton, Ohio. This blog follows his successes and failures as he immerses himself in the culture both behind the scenes and at the conventions. You can find him on Facebook at http://www.facebook.com/GriffinCosplay and Twitter @GriffinCosplay.
To give you guys a kind of look back so you can see where I currently am I thought I’d share with you a few things.
My first two cosplays were the Red Hood and Black Mask. The Red Hood I had some commission work done because at the time I had no idea how to make the stuff myself and it scared the crap out of me. So in order to get started I commissioned the shirt from Snakepit Studios. Keith at Snakepit is amazing. He has given me tons of advice and has been invaluable when it comes to not only getting my suits but also learning how to build myself. If I ever have a question he is always willing to help out. The helmet I had commissioned through a company called Wreck’d Studios. They also did a really great job however as I learn I think I am going to make an attempt to build a Red Hood helmet of my own. The rest of the suit was things that I hunted down a second hand shops, Halloween stores, or the good ol’ internet.
The Black Mask was a little easier. The mask was just a cheap Halloween mask that was really rough and goofy looking. So I took a exacto knife and a heat gun and got to reshaping and cutting and doing anything I could to get the mask to fit better and not look as awkward. I think I achieved my goal on this one and am really happy with how it turned out. The rest of what I am using right now is just a suit that I had around. I am however going to be replacing it with a much nicer suit and hopefully I will be having some new shots taken once I have the nicer suit. 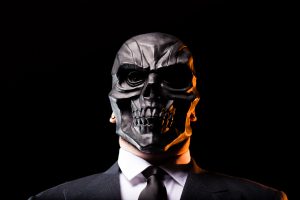 I also had a Green Lantern suit commissioned however I have not yet completed that costume so it remains in my closet until I can get the rest of what I need together.

Next on the list of characters that I absolutely love is Magneto. By far and away he is my favorite villain of all the comic book worlds. So I just had to figure out a way to do it. It scared the crap out of me because I didn’t know how I could ever do him justice. This all came together for me when I saw a helmet that was being produced by XDProps. This helmet just screamed out to me and I had to have it. And then realized that I had access to someone who made incredible body suits. So I contacted both designers and they got to work. First I received my helmet from XDProps and then shortly after my suit from Snakepit.

While the suit looks amazing I really wanted everything to pop so I decided that it was time for my very first ever build. So I decided to start working on the harness that attaches to the cape. I went out and bought a bunch of foam and I got to work. It started with just a basic outline. This first draft looked a lot like a big grey bib. And while I was okay with it at first the more I looked at it the more I decided that I didn’t like it and could do better.

So I went back to the drawing board and mocked up a second draft. On the second draft I had decided that it would be better to make it a lot smaller and try to be more detailed in the design. What came out looked like this…

This design I was much happier with so I decided to move forward. What came next was just a bunch of trial and error. Going to the craft store buying different materials and seeing what would work best. What I ended up with were some thin foam mats and some styrofoam balls.

It was at this point that I started getting really excited. I could see my very first build taking it’s shape. I was very happy with how this turned out and couldn’t wait to get it sealed and painted so I sent my wonderful wife out on a supply run to get the materials. After getting what I needed, I sprayed the harness with Plasti-dip to seal it so that when painting it didn’t just look like painted foam. (Note: if using Plasti-dip make sure to use a really good respirator because this stuff is very toxic when in it’s liquid form)
After finishing with the Plasti-dip I went on to use an automotive primer. My theory was that I wasn’t sure which types of paint would stick to the Plasti-dip but most paint will stick to an automotive primer and it would help bring out the color of the paint a lot more. So two coats of grey primer were applied.

Once the primer had completely dried it was time to get on with painting it. I was lucky that Danny from XDProps was awesome enough to let me know exactly what colors he had used to paint the helmet so that I could match everything up. So I went out and hunted down the purple color that I had needed to match the harness to the helmet and painted on three coats. After it dried this is the final product… with me wearing it (I couldn’t resist).

Now you are completely caught up to where I am now. Next step on this build is to put together the cape, gloves, and boots. I am not quite sure how I will be doing this but stay tuned to this blog and I will be going over it as everything comes together!