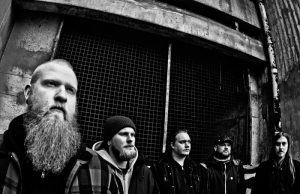 Finland’s UNKIND’s second album for Relapse, Pelon Juuret, continues in the darkened direction of their Relapse debut. Furious d-beat hardcore crossed with a highly creative touch of atmospherics — as if Mogwai made a record of Tragedy cover, or From Ashes Rise were influenced by Explosions In The Sky. UNKIND have taken a tried and true formula (pissed off vocals, monster riffs and d-beat drumming) and made it truly their own by refusing to get caught in the trappings of other crust bands and really letting their musicianship and production values shine. This is a modern day classic of aggressive, intelligent hardcore.
Naturally this kind of thing is going to appeal to the crusty old curmudgeons at Ghettoblaster. And much to our delight, the band and Relapse are allowing us to premiere their lyric video for the song “Kehtoon Tapetut”.
Without further adieu, here it is:

Pelon Juuret was recorded with producer Kari Nieminen at Noisecamp studios in Turku, Finland at the end of 2012 and will be released on CD/LP/Digital via Relapse Records on July 9 in North America, July 8 in the UK/World, and July 5 in Germany, Benelux, and Finland. Pre-order the album here: http://bit.ly/UnkindPelon and keep up with their comings and goings at their Facebook page here: https://www.facebook.com/UnkindHardcore.