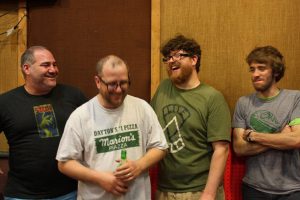 2015 got radical with the announcement that Anyway Records (St. Lenox, Connections, Guided By Voices, The Ass Ponys) would be releasing the latest by The Kyle Sowashes, titled Everybody, on April 28 (today!).
It was like Columbus-based writer Kevin J. Elliott read our minds when he had this to say about Sowash and the band:
“It would be easy for me to start by saying every fertile music scene in America has a Kyle Sowash to call its own. He’s the integral, overambitious, indie-rock everyman responsible for bringing to town bands that, barring his begging, would otherwise pass on by. He’s the fervent local enthusiast always in the front row, even on a wintry Tuesday. His floor’s been infinitely crashed upon, his bank account tapped from self-financed/self-made tours of the country — basically he’s racked up enough D.I.Y. karma points that you’re obligated to buy his new record Everybody on his good works alone. Sowash’s selfless moral character may be common in places like Cleveland, Portland, Athens, and Chapel Hill, but his style, his demeanor and his songs are distinctly Columbus, Ohio.
Normally, naming a band after oneself is a shallow stroke of ego (e.g., Steve Miller, Bob Seger), but for Kyle Sowash, it couldn’t be any other way. After slaving over a decade’s worth of unrecognized lo-fi indie anthems, he deserves a complete, full-throttle band to flesh out his earnest ballads and scrappy pop songs.
The Kyle Sowashes are a supergroup of sorts, composed of four dynamic players assembled from formidable Ohio bands such as 84 Nash, SPD GVNR and The Cabdrivers, but each is channeling a little Kyle Sowash on Everybody.
Recorded in August 2014 in Columbus, Ohio by Keith Hanlon, Everybody’s 16 songs are straight out of the indie rock cookbook. Tracks like the propulsive “King Shit of Fuck Mountain” and “The Day You Called Me Captain” are fortified with extra heft and sonic vision, but they retain the goofy charm and sharp hooks that have defined Sowash’s career.
Sowash readily admits his debt to indie rock’s golden age. Everybody is a study in the work of bands such as Superchunk, Archers of Loaf, Silkworm and Pavement–but he draws on those influences judiciously. In other words, this is no tribute album. While “Irrelevant” and “Richmond, VA” will certainly signal a nostalgic flag, the themes are distinctly Columbus, distinctly Kyle Sowash. This album makes getting older and longing for the mid-’90s sound fun… It’s time to get your beard ready again!”
To celebrate the release, Ghettoblaster has the pleasure of premiering the video for “King Shit of Fuck Mountain,” which was directed by Mike Postalakis.  For a more family friendly version of the song, see the album’s alternative cut, “King Chip of Fudge Mountain.”  Enjoy: