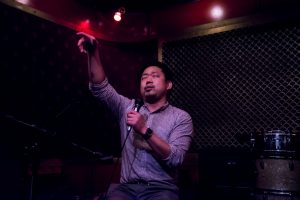 St. Lenox is the project of Columbus, Ohio’s Andrew Choi. Categorized as folktronica, r&b and jazz, he has performed nationally, appearing at CMJ and MidPoint Music Festival. His debut album, 10 Songs About Memory and Hope has received critical praise from NPR and Dusted Magazine, and John Darnielle, of the Mountain Goats, called him a “lyricist of the highest order.”
Today Ghettoblaster has the pleasure of premiering a live video for “You’re Not Here,” done as part of the Mug & Brush sessions, which also included Lydia Loveless and Connections. This is what Choi told us about it:
“An interesting anecdote about that song in the Mug & Brush video – I actually performed it live, on the season premiere of Season 3 of a show called Extreme Cheapskates, on TLC, serenading a couple going on a date.  The producers cut everything except for maybe the first five seconds of the song.  So, this is the full version of that song.”
Watch it here: