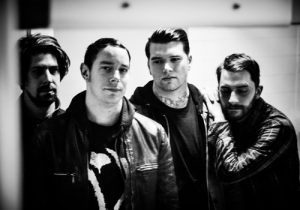 Described as “a volatile, controlled explosion,” Mercy Ties deliver punk and hardcore that is derived from the heavy influences of Seattle’s chaotic mainstays such as Botch, Blood Brothers and Harkonen, Also from Seattle, Mercy Ties have taken what was already considered “complex structure” or “mathy” and have shot it into new altitudes and added elements of math rock and grind to create something unsettling, unpredictable and distinctive. Simply, they are redefining what could be done when heavy, aggressive music.
The debut LP, and second release for Glory Kid Ltd., was recorded in Oakland, California by Scott Evans (Kowloon Walled City) at Sharkbite Studios and mastered by Brad Boatright (Modern Life Is War, Nails) at Audiosiege. The album, Proper Corruption, will drop this winter.
Ghettoblaster has the pleasure of debuting the official video for “You Have The Right To Remain Violent,” which the band said will “satiate your patriotism and celebrate America’s birthday.” The video was directed by JP Schmidt and Andre Sanabria. Enjoy: