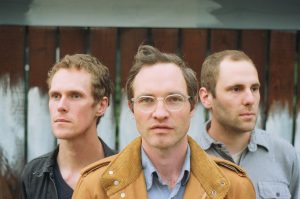 Seattle’s Lonesome Shack released More Primitive via Alive Naturalsound Records. The album finds the trio exploring the depths of boogie and country blues with a sound that is raw and immediate. Finger-picked guitar lines, soulful crooning and big danceable grooves the band take the American blues tradition to a new level, examining personal history, loss of friends and a burning desire to get to the primitive core of life.
The band began in New Mexico’s Gila Wilderness where Ben Todd hunkered down in the shack he built and studied the music of the American folk and blues lineage. In 2008 Todd joined up with drummer Kristian Garrard in Seattle, and in 2011 bassist Luke Bergman became the third member.
Lonesome Shack’s More Primitive is out now on CD, digital formats and limited edition vinyl through Alive Naturalsound Records.
Today Ghettoblaster has the pleasure of sharing their video for the title track. Todd had this to say about the video, “My brother and I snuck into a private resort’s mini golf course near Salt Lake City late one night and I let off some steam on the green.  It felt like the perfect setting for a ‘More Primitive’ video. This is a song about digging into the inner core of life.”
Enjoy it here: Visit the band here: http://lonesomeshack.com