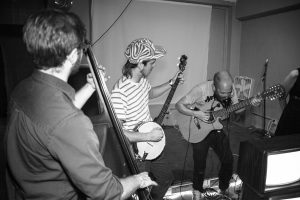 Since their start in late 2012, Human Behavior has been interpreting Americana through an abstract lens. They combine the imagery of American gospel music with freak-folk experimentalism. They display this eccentricity not only in their sound, but also through video art, projected on vintage TVs. Human Behavior’s mixed genre has allowed them to fit in anywhere, from clubs to art galleries, theaters to garages, living rooms to caves. They have opened for Xiu Xiu, Waxahatchee, Andrew Jackson Jihad, Emperor X, and played a Burger Records Showcase. They have built a devoted following, across the United States and elsewhere, through relentless touring.
Human Behavior has always been an ever-changing lineup, ranging from one to thirteen members, with new installations of video art for every tour. Andres Parada, songwriter and videographer, is the one steadfast component. He uses the project to portray his manic-depressive lows, which often crescendo to orchestral highs.
Because of Human Behavior’s unique take on American folk music, they were picked up by Folktale Records, a Los Angeles record label, who rleased the bands Golgotha in 2013 and Eat The Wind earlier this year. Human Behavior’s upcoming record, Bethphage, will be released on February 3, 2015.
Zach Zdziebko (known for his work on VH1, Adult Swim, and Funny or Die) has created a music video for the opening track, “Chapter 1.” The band chose to premiere the track with Ghettoblaster today. Enjoy:

You can pre-order the vinyl here: www.folktalerecords.com/releases/ft066. Visit the band at http://www.facebook.com/HumanBehaviorAZ.