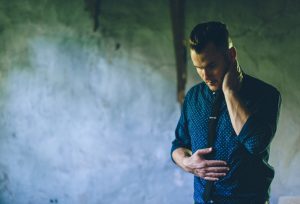 Dohse (photo by Will Vastine)

Old Roads (out September 9) is the debut EP by Dohse, the new solo project from singer-songwriter Nathan James Dohse.
After a decade fronting desert dance rock band Fight the Quiet, Dohse knew it was time to change things up and strike out on his own. He had relocated from Flagstaff to Nashville in an exodus rooted in restlessness.Written prior to his move to Nashville, the songs on Old Roads capture this desire to make the leap toward something greater, and to stop searching for new opportunities along the same old rutted roads.
Nashville’s new roads have brought fresh opportunities to connect with a thriving community of musicians. Dohse performed earlier this year at International Pop Overthrow Nashville 2014 and has found early support from music writer Andrew Leahey (Rolling Stone, Paste, American Songwriter, Washington Times), who penned Dohse’s official bio, and producer J. Hall (Young the Giant, The Delta Saints, The Glorious Unseen, Saving Abel, Taddy Porter), with whom he had teamed up to record the songs on Old Roads.
Enamored of “Something”-era George Harrison and rooted in a coming-of-age soundtracked by Copeland, The Juliana Theory, and Dashboard Confessional, Dohse’s songwriting is a compelling blend of alternative, emo, and Americana.
Ghettoblaster has the pleasure of premiering “End of Main St.” The track was produced by J. Hall (Young the Giant, Saving Abel, The Delta Saints) and the video was produced by Jeanz Media. Enjoy: