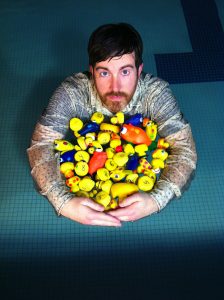 Maine-based singer-songwriter Chris Robley’s fifth full-length, The Great Make Believer (Cutthroat Pop), his first in five years, sheds the lush orchestration of previous releases to deliver a raw, country-tinged collection of ten pop-folk songs that detail his quest for redemption.
Whereas his previous releases – 2005’s This Is The, 2007’s The Drunken Dance of Modern Man In Love, 2009’s Movie Theatre Haiku, and 2010’s Ghosts’ Menagerie (all on Cutthroat Pop Records) – went for bigger production, lush soundscapes, and plenty of instrumentation, with The Great Make Believer, Robley  let go of creative control and embraced collaboration, helping to ensure the album’s raw feel.
Robley and friends – Arthur Parker (bass), Rob Stroup (engineer/producer), Naomi Hooley (vocals), Anders Bergstrom (drums), Bob Dunham (electric guitar), and Paul Brainard (pedal steel) – went to their friend Nick Peets’ beach house on the coast of Seaside, Oregon. They turned the place into a makeshift recording studio, spent a few fun days holed up together, and tracked everything live.
The road leading to The Great Make Believer wasn’t an easy one — a divorce, a move, a father’s cancer diagnosis and battle, becoming a father – but it ushers in a vulnerable, introspective Robley who is less Beatles and perhaps a little more Daniel Lanois.
Today Ghettoblaster has the pleasure of premiering the video for “Silently.” This is what he said about it.
“ The first thing I always think to say about ‘Silently’ is that it features a guest choir of chickens. Well, not real chickens. Just… the band, doing our best chicken impressions. Because why not? Second, this was definitely my attempt to write something in the vein of the Great American Songbook, back when it was okay to use phrases like ‘quite remiss’ in a pop song. It was a ton of fun to record. Anders (the drummer on the rest of the album) had to leave early, so Rob Stroup, the producer, sat in for this last song, assembling a drum kit out of boxes and kitchen utensils. And the drunken barbershop call-and-response vocals were handled by Rob Stroup and Naomi Hooley hilariously holding their nostrils closed while they sang.
Chickens. Mouth trumpet. Kazoo. Nasal and inebriated backup singers. All fun ways to dress up a sad song about ‘How the heat of desire is akin to a warm winter fire that burns bright, then expires, silently.’ Even though I live in Maine now, I’m usually back in Portland, Oregon every three months or so. On my last trip I went up to Mt. Tabor — an old extinct volcano that overlooks Southeast Portland — and used Hyperlapse to shoot the sky at dusk for this video.”