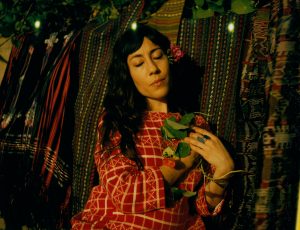 To say that Amy Blaschke‘s songwriting is ambitious would be an understatement.
A Seattle born singer/songwriter based in Los Angeles, Blaschke has been releasing her brand of understated and soulful song craft since 1999. Her most recent efforts include Desert Varnish (2013) and Night Canopy (2007), and in the time since these releases, Blaschke collected 28 original songs, 11 of which would become OPALINE, her forthcoming fifth studio album.
It’s this prolific, but unforced, output that has allowed for Blaschke to expand into new territories on OPALINE which winds between lush, folk-pop melodies (“Running Into the Fire”) and sparse, intimate arrangements (“Opaline” and “Walking with the Rise”) that honor Blaschke’s original vision. With each song on OPALINE, Blaschke sets a mood, only to tear it down and rebuild on the next track.
Recorded in early 2014 at Station House Studios in Echo Park, California, OPALINE was produced by singer/songwriter and multi-instrumentalist Brian Whelan (Dwight Yoakam, The Broken West) and engineered by Mark Rains (Black Rebel Motorcycle Club, Waylon Jennings).
Look for OPALINE October 9 via Rocket Heart Records and enjoy the video for “Walking with the Rise” via Ghettoblaster today: